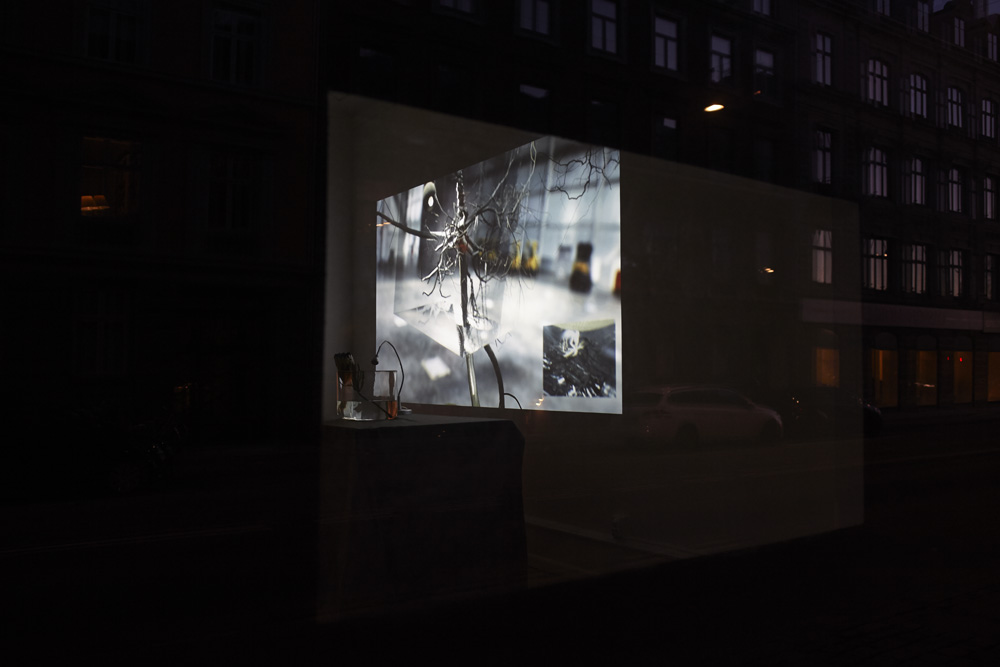 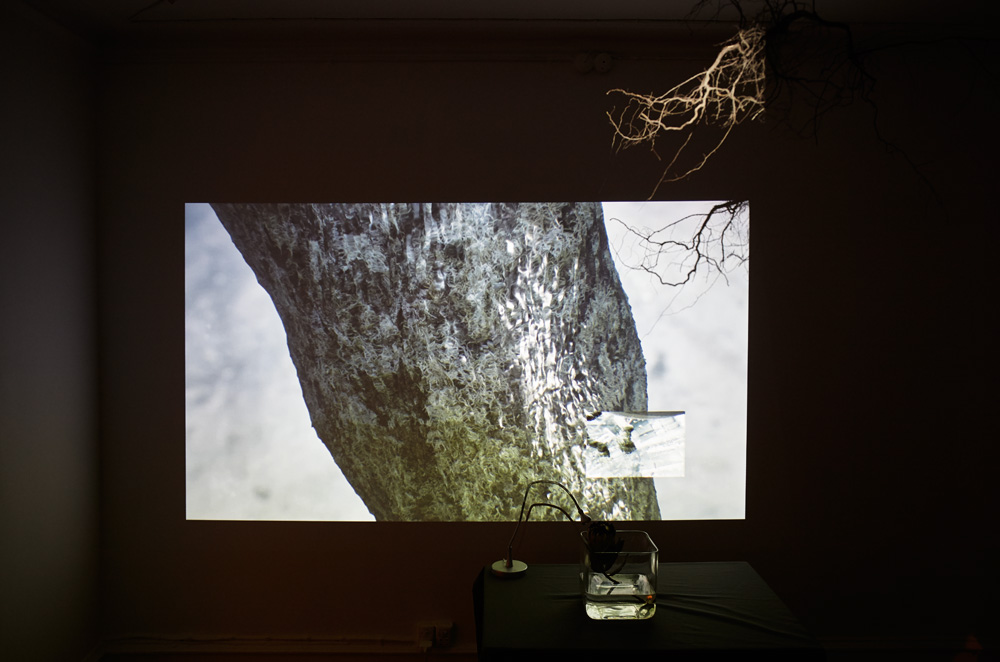 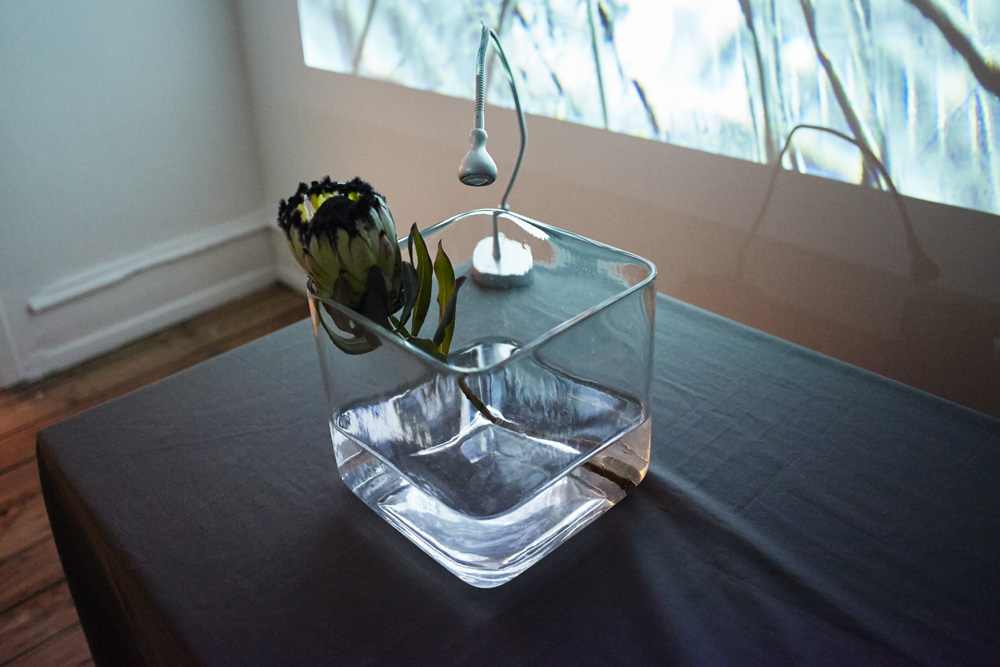 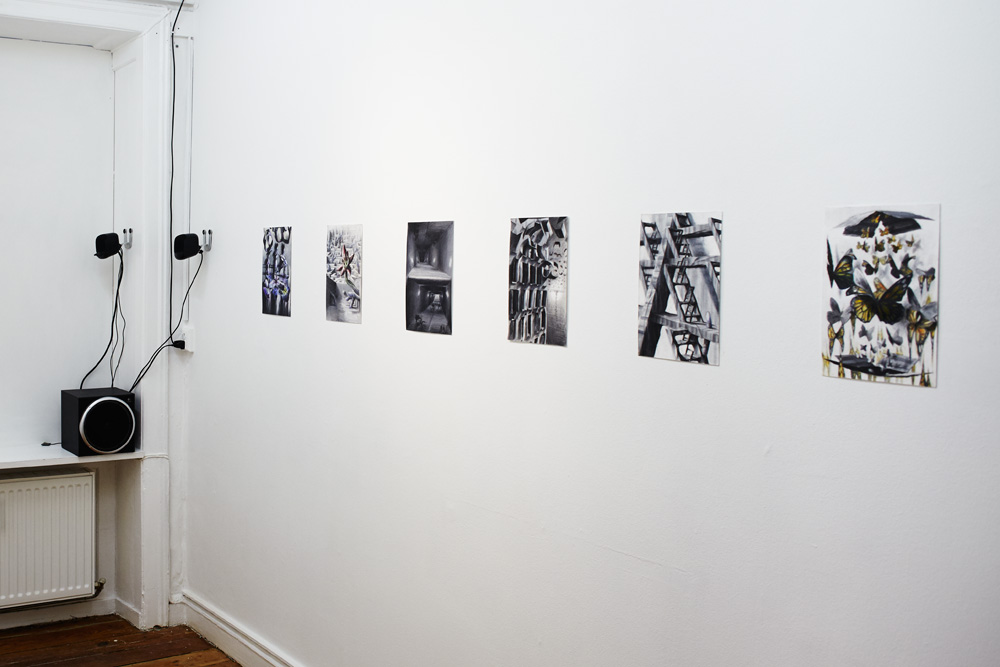 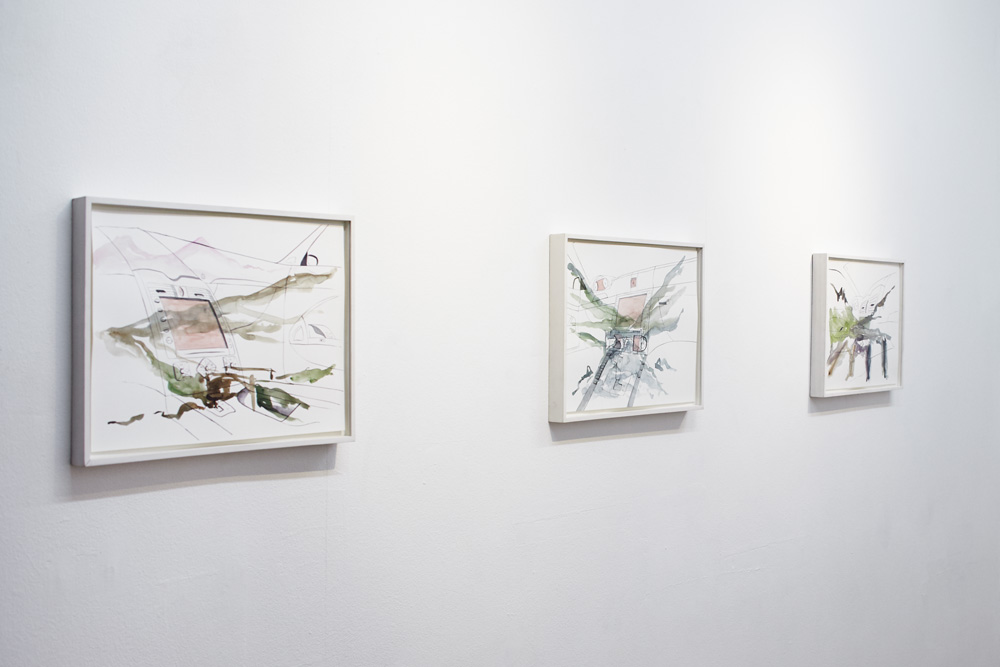 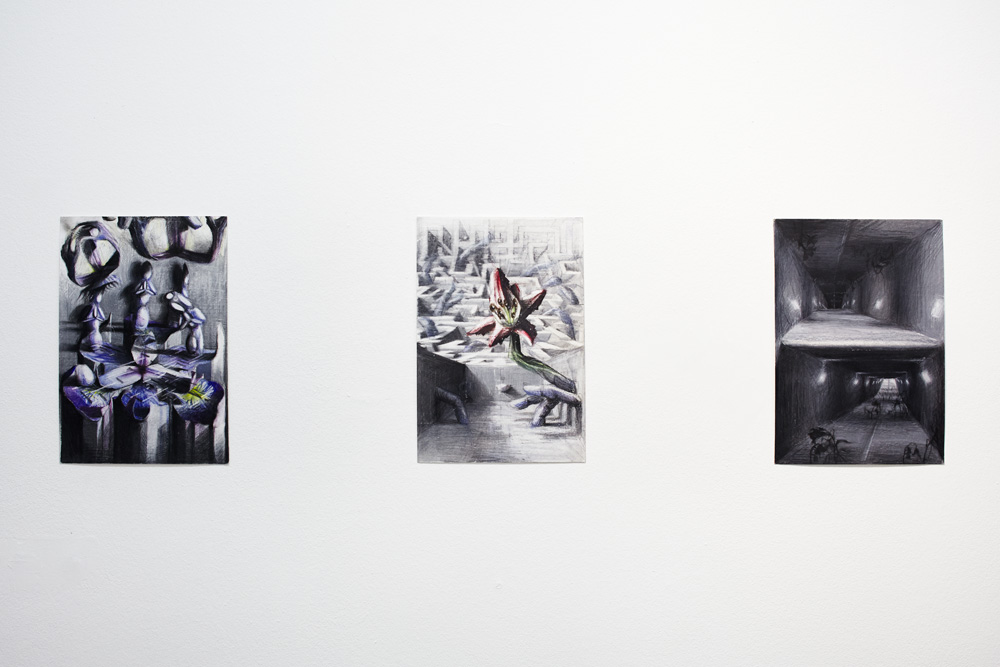 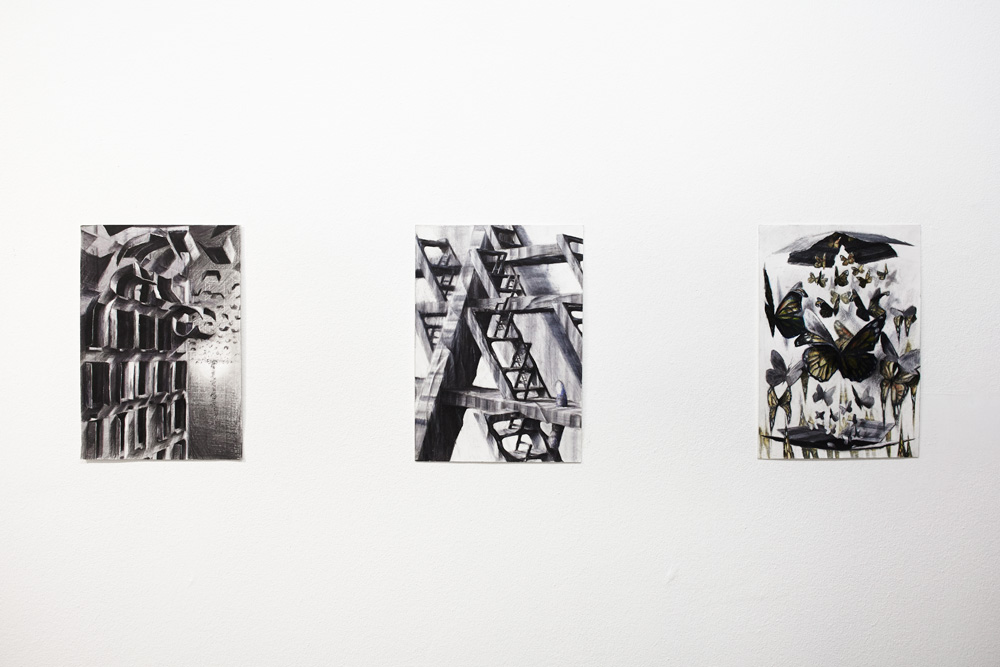 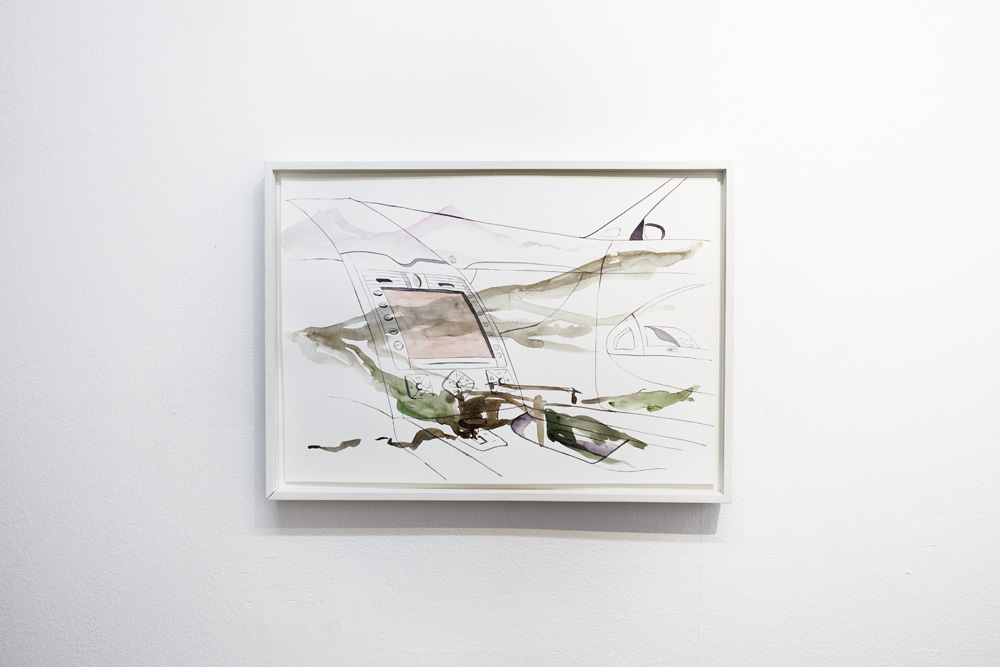 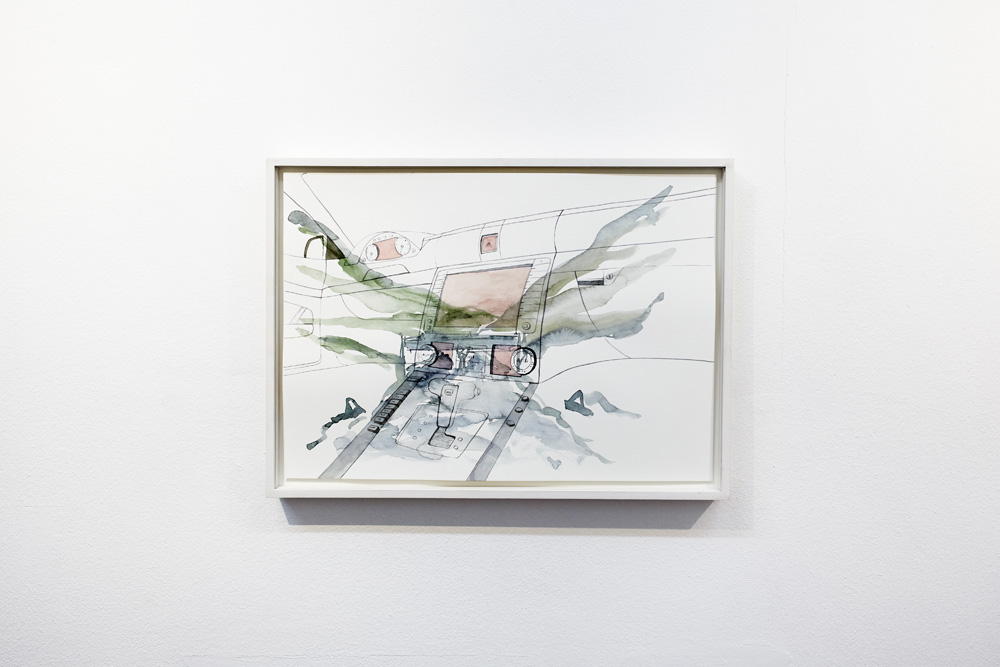 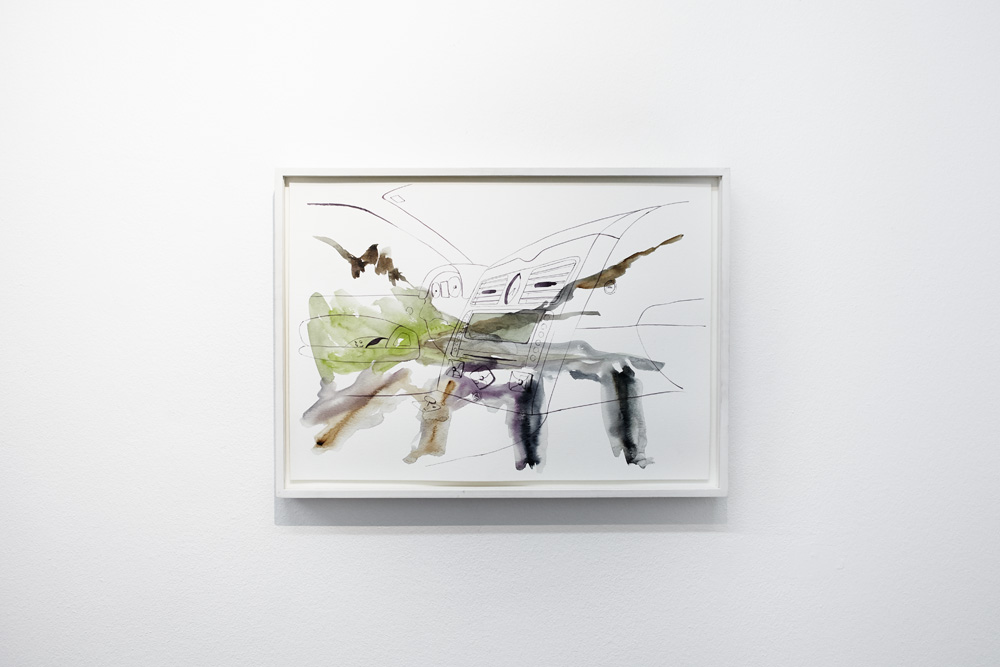 The exhibition Re-Routing Nature explores various correlations and entanglements between nature’s organic forms and technological progress. A twofold investigation is opened up by the title of the exhibition, which plays on the two verbs ‘to root’ and ‘to route’. The title suggests a ‘re-routing’ or ‘re-rooting’ of our understanding of how technology and organic life can begin to form close relationships and emerge as new kinds of cybernetic organisms, also referred to as cyborgs.

Re-Routing Nature presents a range of artworks by artists who work with the inseparable connections between nature and technology, and the new hybrid forms these create. Jakob Kudsk re-creates futuristic virtual simulations of existing real-world tree roots and examines how imagination, technology and ecology intertwine. Embracing the view on animism expressed by Adorno in his Dialectic of Enlightenment (1944), where he formulates it as a cultural activity pitted against the capitalistic serial approach to image creation, Kudsk addresses technology as a prosthesis with which to experience the world and as a channel to animate it. Rune Bosse researches concepts such as nature and decay, using organic materials as a poetic language to investigate and articulate, through organic syntaxes, how we perceive and understand a topic like the passing of time. Through his practice, he gives new life to organic elements by re-assembling scattered timber, sticks and twigs into sculptures, whose forms recall branches from the crown of a tree deprived of its leaves. Viktor Timofeev explores the entanglement of the organic with the inorganic in his coloured pencil drawings, creating imaginary worlds which eschew binary relationships in favour of complex connections and relations between matter. Alfredo Aceto investigates how organic elements and amorphous forms grow and take over machines and other sorts of manmade landscapes. His drawings investigate the concept of ‘endemic’, looking at infiltrations of alien organic bodies into determinate inorganic contexts, as though nature would threaten the existence of human habitats. The artist duo Biitsi create sound installations and music performances based entirely on the agency and properties inherent in organic materials and nature’s systems.

The invited artists in Re-Routing Nature re-examine and re-imagine the composite layers of interconnectedness and interdependence between nature and technologies. Their research and practices go beyond the binary relationship that is too often addressed as characteristic of both. By embracing different media – from virtual reality films to installations, performances and drawings – the invited artists suggest ways of re-considering the entangled and interdependent connections between human, organic and inorganic bodies. Each of them embarks on an alternative route to understanding ecology and our relationship to it.

Jakob Kudsk is a Danish artist and art director based in New York, specialized in VR and real-time virtual simulations of ecosystems. His work is at the forefront of real-time rendered virtual environments, and he develops projects through collaborations with technology and natural science institutions. He has recently exhibited at Times Square for the Midnight Moment, at Carnegie Museum of Art, The Moving Image Fair, NYC, MAXXI, Museum of Modern Art, WIRED annual conference, FRIEZE in London, Podium in Oslo, Ok Corral in Copenhagen, 86 Project Space, Brooklyn, Sleep Center, China Town and at London Science Museum. His work has been featured in MOUSSE Magazine, Artnet, The Art Newspaper, Hyperallergic, Spike Art Quarterly, ARTREPORT, Politiken, Information, Worm, NEO2, VICE, NY Times, WIRED and TSOEG. He has been an artist in residence at Bemis Center for Contemporary Art, AADK, Centra Negra, MASS MoCA, BRIC and Mana Contemporary.

Rune Bosse lives and works in Copenhagen. Throughout his artistic and research practice, he articulates a poetic understanding of the world through nature. He sees nature as a laboratory, a research zone, in which to experiment and understand how to navigate and investigate aspects of human life and artificial structures. Kunsthal GL Strand, Copenhagen; Four Boxes Gallery, Skive; ARoS (Triennial), Aarhus; Grøntorvet, Valby; Roskilde Festival; Den Frie, Copenhagen; (Festival of Future Nows), Hamburger Bahnhof, Berlin.

Alfredo Aceto is a visual artist based in Switzerland. Using sculpture, film and sound, Alfredo Aceto creates spaces suspended between fiction and reality. He establishes melancholic environments, artificial time alteration, and image saturation. His work has been shown at institutions and galleries such as Museo del Novecento (Milan, IT), Andersen's Contemporary (Copenhagen, DK), Kunsthaus Glarus, Centre d'Art Contemporain (Geneva, CH) and Villa Medici (Rome, IT). In 2016 he won the Kiefer Hablitzel Prize at Swiss Art Awards (Basel, CH). He has been teaching at ECAL (École Cantonale d'Art de Lausanne) since 2016. His work is represented by ANDERSEN'S, Copenhagen, Dittrich & Schlechtriem, Berlin and Levy Deval, Brussel.

Biitsi is the musical and artistic outlet of the artist and sound designer Kimmo Modig, and producer and musician Heidi M. Wee. In 2017, the duo collaborated with artists Tuomas A. Laitinen and Nora Khan on an audiovisual performance at Sinne gallery, Helsinki. They have also played at Kokimo collective's performance happening in Contemporary Art Museum Kiasma. Biitsi is currently working on a debut album. Aside from producing music, Biitsi designs sound, co-produces and makes videos for other artists.

Irene Campolmi is a Copenhagen-based Italian curator, currently completing her PhD thesis ‘Ethical Approaches in Curating Collections in Contemporary Art Museums’, at the University of Aarhus. From 2013-2016, she was PhD Fellow affiliated with the Louisiana Museum of Modern Art (Denmark), where she coordinated and co-organized the international symposium “Between the DISCURSIVE and the IMMERSIVE” (Dec. 3rd-4th 2015). She curated the 2017 Talk, Film and Performance Program “Art ReActs” at Code Art Fair, and will open her next exhibition #whatif at Kunsthal Charlottenborg in Copenhagen in March 2018, among other projects. As of 2018, she is organizing exhibitions in the project space Andersen’s Bredgade in Copenhagen. Her research and curatorial practices investigate ecology, feminism and ethics in visual arts and performance. She has worked at the Kunsthistorisches Institut in Florence, Max Planck Institute (Italy/Germany), Louisiana Museum of Modern Art and Kunsthal Aarhus (Denmark), the Italian Embassy in Copenhagen, the National Gallery of Modern Art in Rome and Galleria CONTINUA in San Gimignano (Italy).