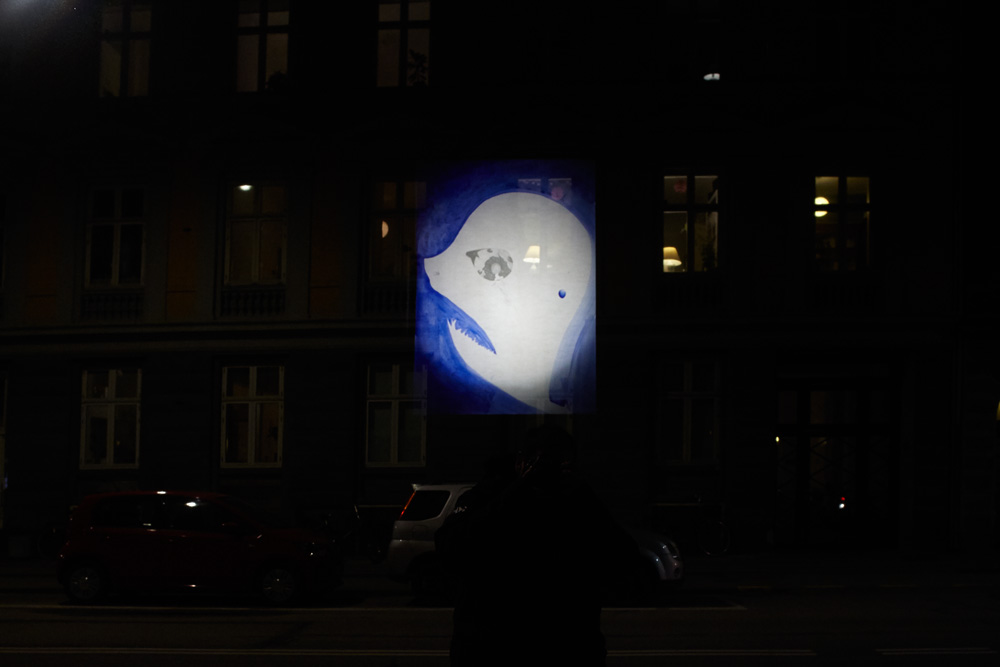 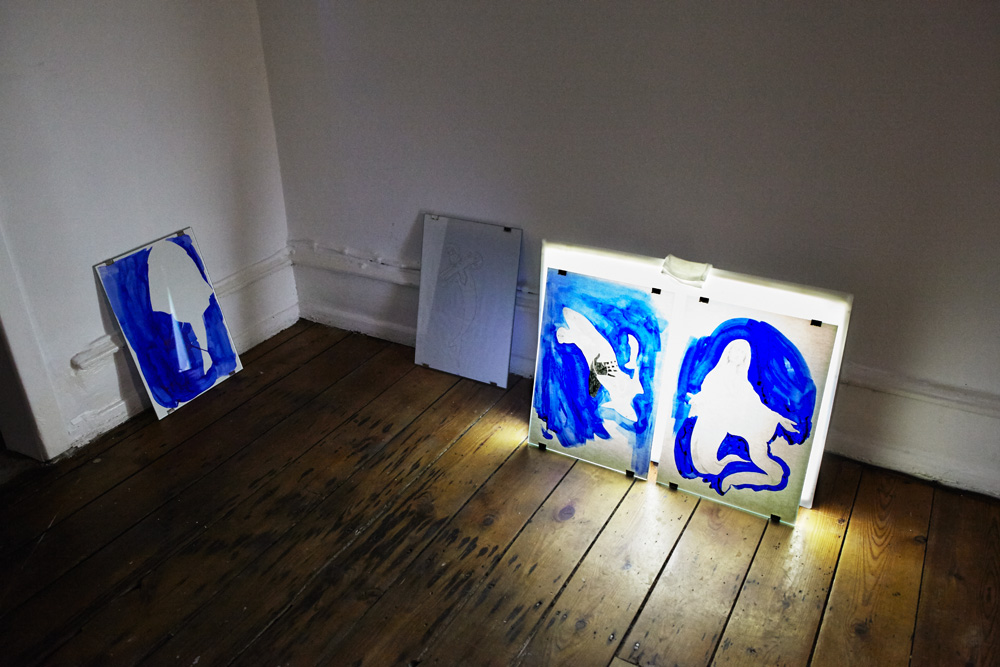 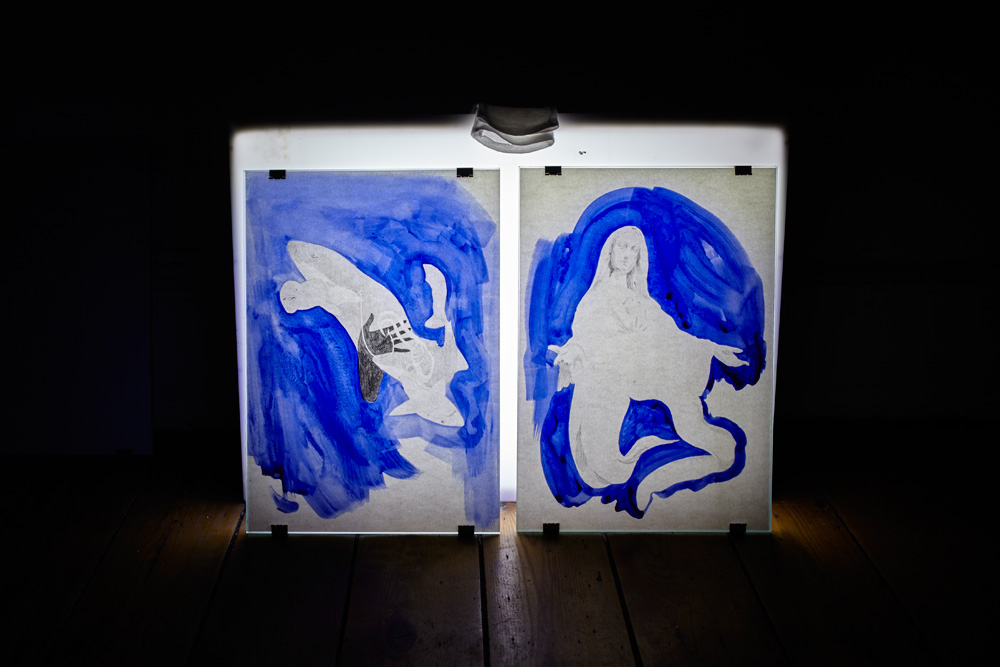 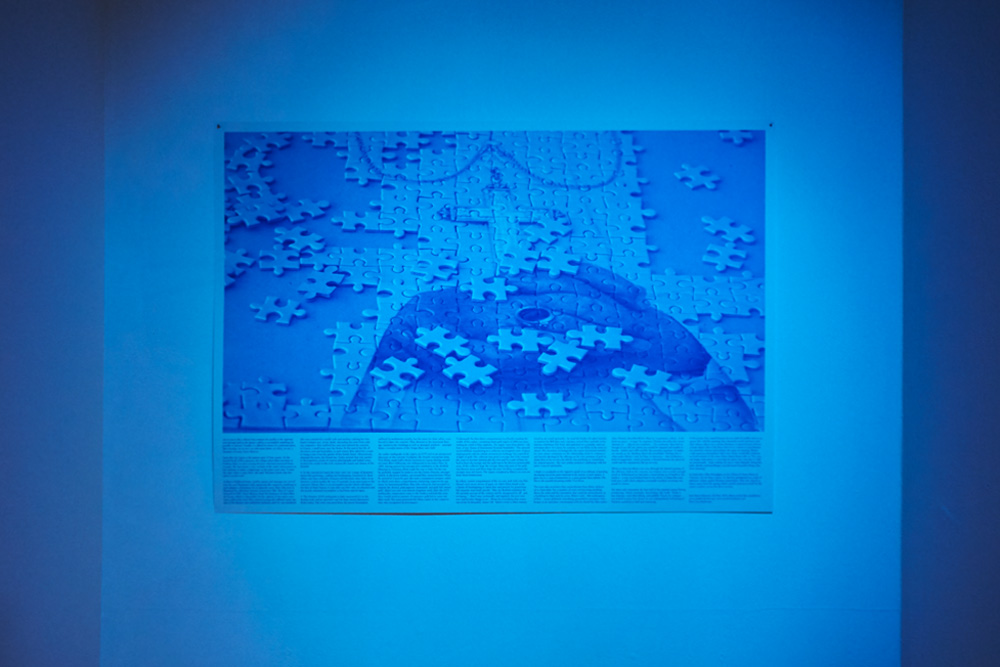 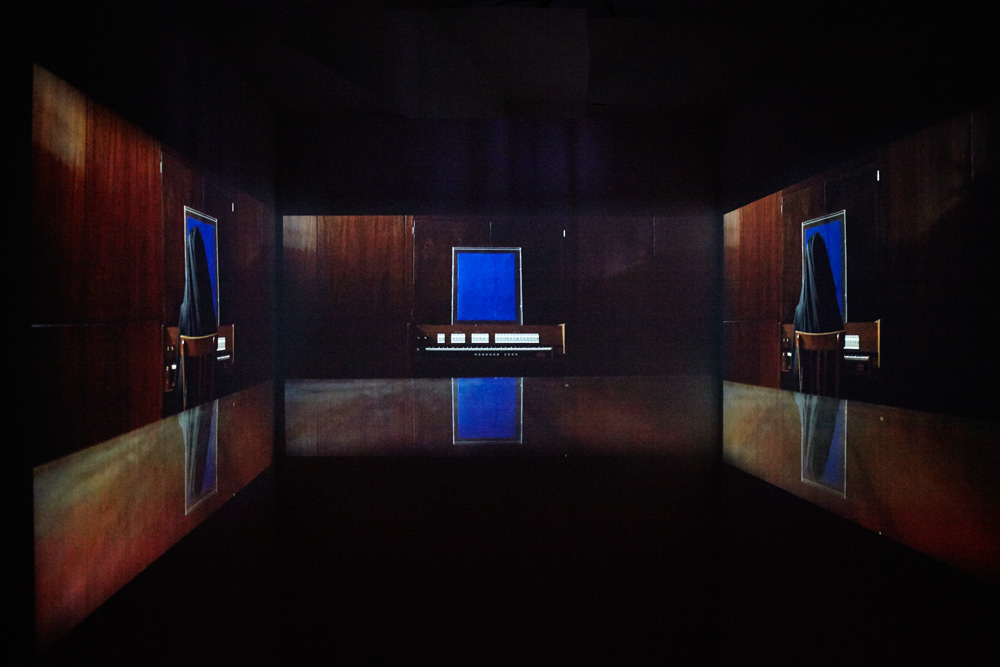 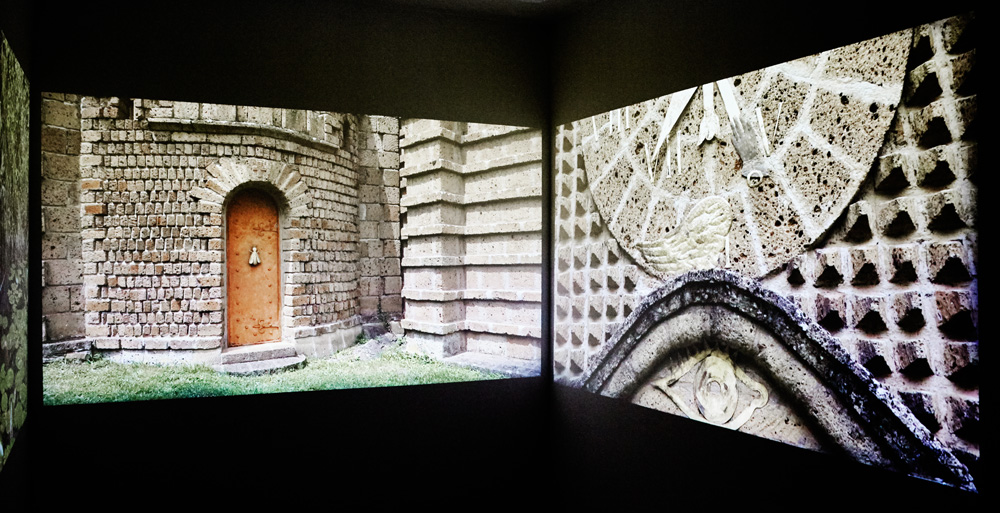 Looking at the spiritual in late capitalist society

The title of the exhibition Beyond the Sea refers to the colour ultramarine that in the Renaissance was made using the semi-precious lapis lazuli stone, which came literally from beyond the sea in Afghanistan. Ultramarine was perceived as “a colour illustrious, beautiful, and most perfect, beyond all other colours;” as Cennino Cennini wrote in The Craftsman’s Handbook. As such it was often used to paint the blue robes of the Virgin Mary, the colour itself becoming associated with the holiness of the Madonna. Yet, being obtainable only from lapis lazuli, the transcendental value of the colour was always bound up with the financial expense of obtaining it via long and sometimes perilous trade routes across land and sea.

In this sense, ultramarine also stands for the way in which the spiritual and the material aspects of life were historically intertwined, and it is arguably only post-Enlightenment thought, in which the rationalist approach of the natural sciences compartmentalised and categorised western understanding, that led to a separating of the two. Today, however, categories that seemed stable are challenged by technological inventions that are justifiably understood as a new industrial revolution, while discoveries from within the natural sciences themselves question the rationalist foundations of our thought right down to the molecular level. In this context, the human subject in late capitalist society, who has often laid established religion aside, has increasingly begun to look for a spiritual dimension to the materialist universe.

In disciplines such as anthropology and biology, non-materialist conceptions of the world which are not necessarily founded in religious belief have gained increasing attention. These conceptions may, for example, involve comprehending the biosphere as an active, communicating system, which the human subject is not separated from but firmly rooted within, be it the study of ecosystems in terms of mutual biosemiosis between animals and plants, or the increasingly common understanding that our bodies contain and are dependent upon millions of different bacteria and flora. At the same time, systems of meaning at odds with the findings of natural science have endured in the popular imagination, both in terms of the continued appeal of established religions for some, and of folkloric beliefs that have persisted within the belief systems of those religions as well as existed on their margins.

In this context, the artists explore the meaning of the spiritual from within and without the framework of religion. Julie Born Schwartz examines the daily activities of the nuns at the Santuario Santa Rita da Cascia, where the convent affords the nuns a form of existence which is very different from the way many of us live today. This is a characteristic reflected in the pace of the film, which insists on offering time to contemplate the images, in marked contrast to the image barrage of existence in capitalist societies. At the same time, the convent is the resting place of Saint Rita, who acquired the epithet the ‘Saint of Impossible Causes’ due to the large number and quality of the wondrous events in which she posthumously interceded, reminding us that medieval and early Renaissance Catholicism was itself replete with mysticism, folklore and commercial incentives. In her series of drawings, Marie Kølbæk Iversen develops her interest in exploring magical practices and beliefs, characterising them as ‘monstrous’, and figuring them as both illuminated and overlaid the uncertain space of our own reflections. As such she formulates them within and as a contestation of the rational-irrational dichotomy to which our thinking often still seems bound.

The interrogation of the Cartesian model of rational enquiry and later structural analyses of individual disciplines has given the field of aesthetics a central position in contemporary thought, allowing it to address the divisions imposed on reality by modern reason and the industrialisation of experience. Able to approach the relationship between mind and world, aesthetics integrates the artistic and philosophical significance of metaphor as an operation that breaks accepted boundaries and creates novel perspectives. In looking at the late capitalist subject’s interest in a spiritual aspect of existence, Born Schwartz and Kølbæk Iversen return us to the colour ultramarine as a metaphor for the inextricable relation of the spiritual and the material.

The modernist artist Yves Klein left several ‘ex-voto’ offerings to Santa Rita, which make use of the ultramarine hue he was to patent as International Klein Blue, so reformulating in capitalist terms the intertwining of the commercial and the devotional. Kølbæk Iversen uses ultramarine in extension of her geopolitical and art historical research, utilising it as an image both of trade and the exchange of value between East and West, and of the sea itself as simultaneously border/barrier and channel of communication. In this sense, Beyond the Sea asks us to consider what can lie beyond the horizon of the way we organise life, and how aesthetic expression can continue to nuance the understanding of our world.

Marie Kølbæk Iversen
Born 1981 in Herning, Denmark. Lives and works between Oslo, Norway, and Copenhagen, Denmark. Artistic research fellow at the Oslo National Academy of the Arts and Aarhus University since October 2017. Graduated visual artist MFA from the Royal Danish Academy of Fine Arts in 2008. In 2019, participant in the exhibition Let the field of your attention…. soften and spread out, which formed part of Tallinn Photomonth Biennial at Kai Art Centre in Tallinn, Estonia. In 2018, recipient of Aage and Yelva Nimb’s honorary grant for her participation in Marie Laurberg’s The Moon at Louisiana Museum of Modern Art, Humlebæk, Denmark, and Henie Onstad Kunstsenter, Oslo, Norway, with the large-scale video installation Io/I and the opera Moonologue, composed in collaboration with Katinka Fogh Vindelev as a commission for Louisiana. In 2017, Marie was the recipient of the ARKEN travel grant, as well as the PKU and Novo Nordisk Mads Øvlisen grants for artistic research with special mention.

Kindly supported by Københavns Kommunes Råd for Visuel Kunst and The Danish Arts Foundation. Julie Born Schwartz’ contribution to the exhibition was made possible through the generous support of The Danish Arts Foundation, Zeuthen’s Mindelegat and Mahler & LeWitt Studios residency program, where she was hosted while making Ex Voto, over the course of two years, in the city of Spoleto, Italy.