Unveiling Forms: Beyond Me 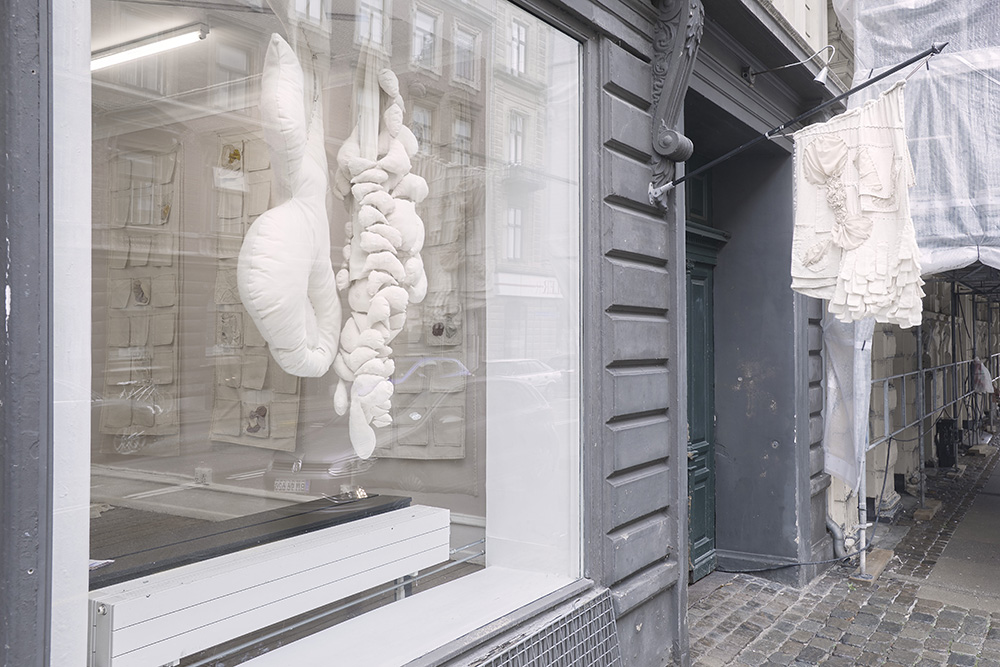 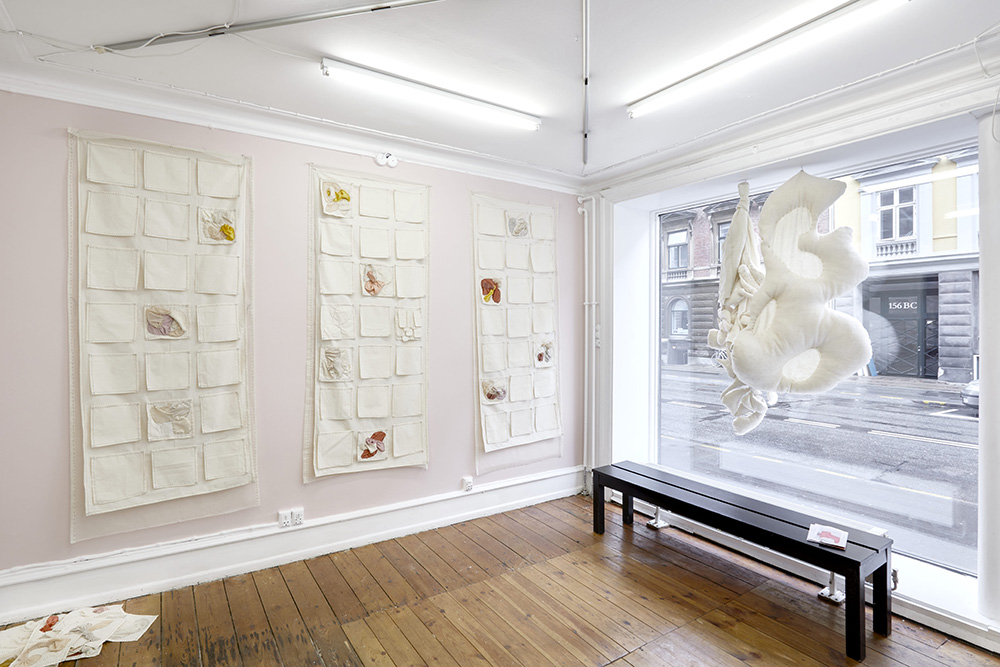 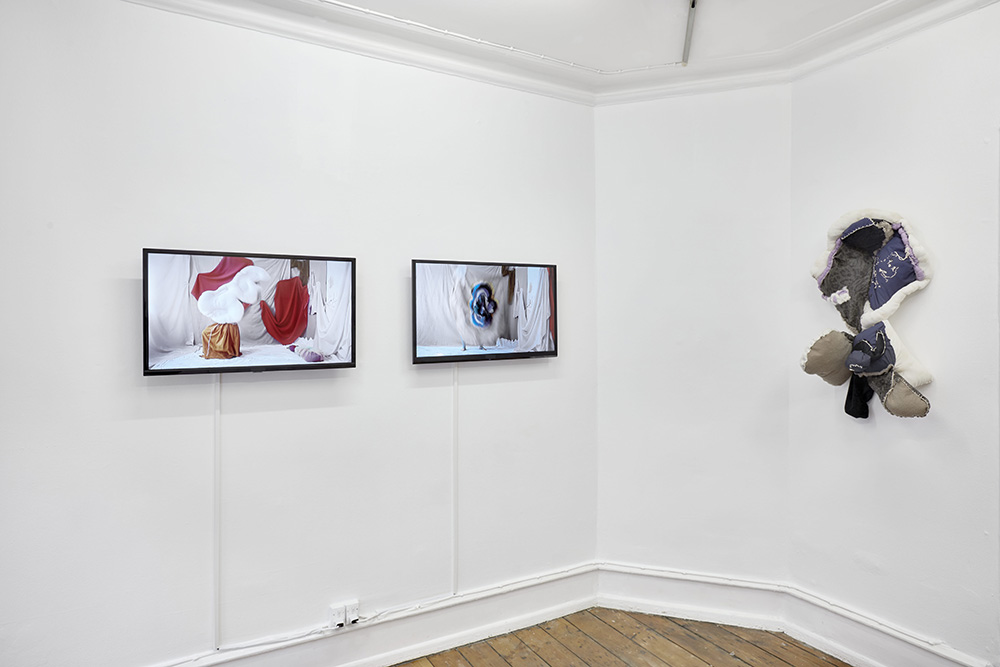 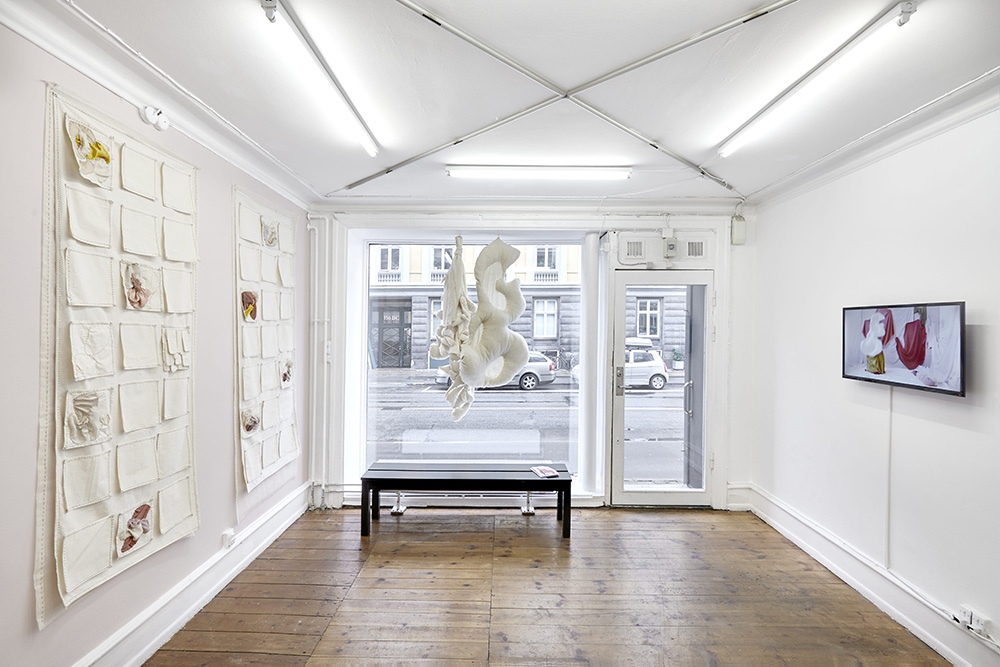 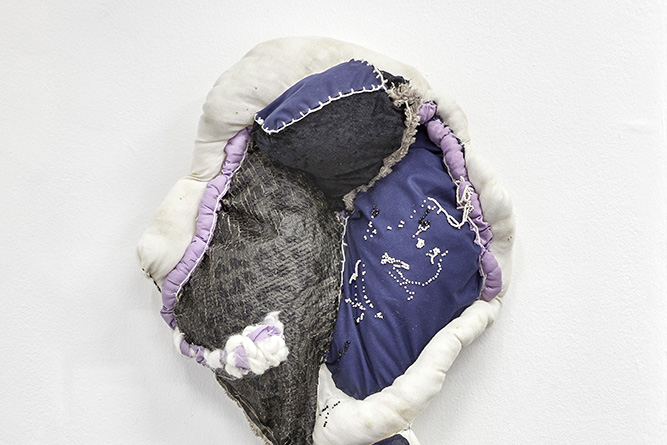 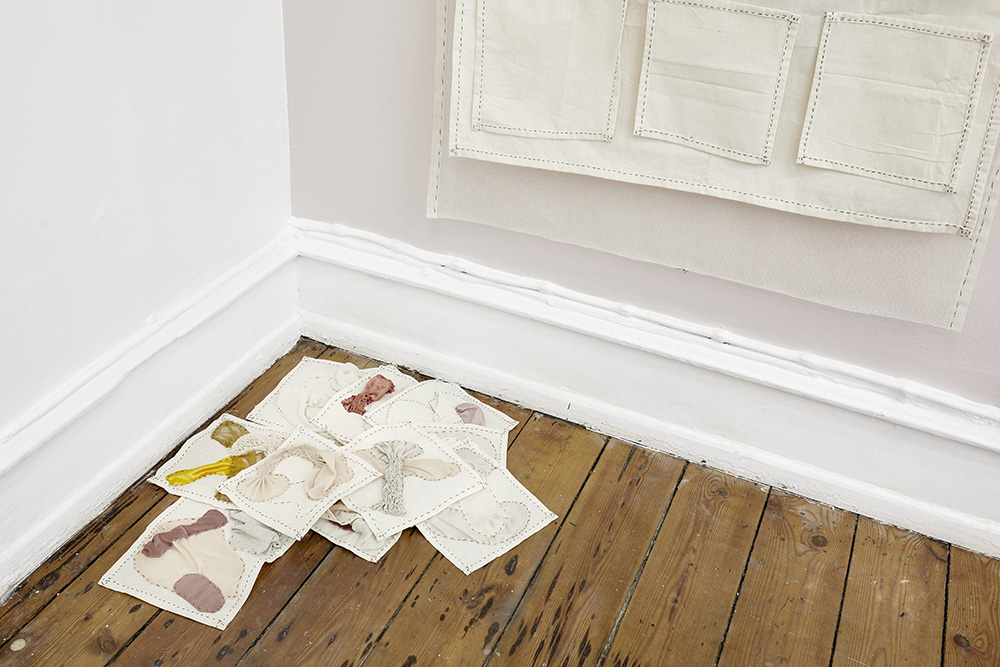 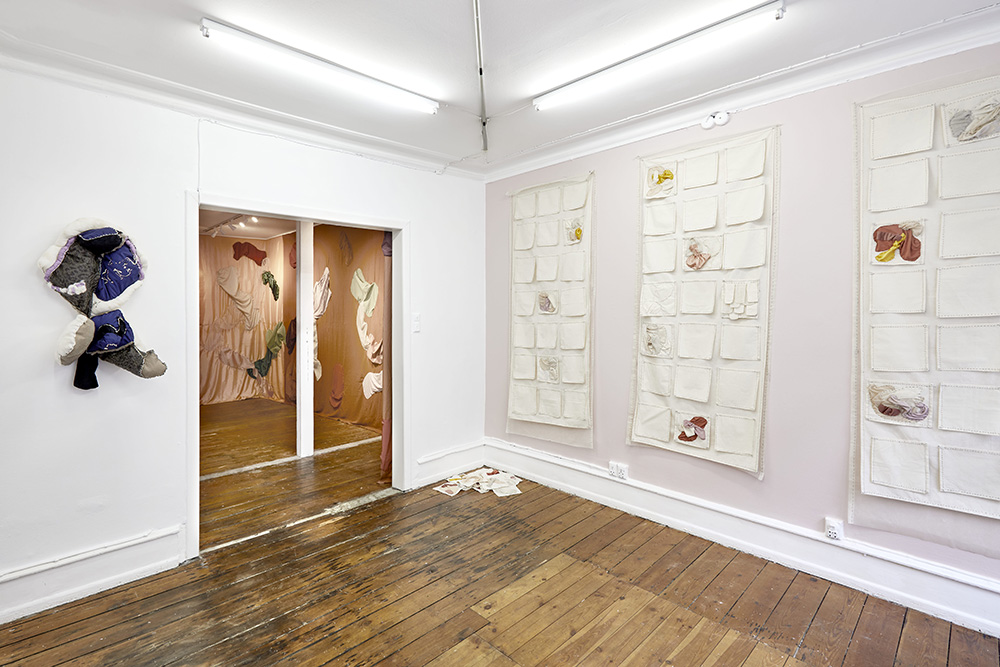 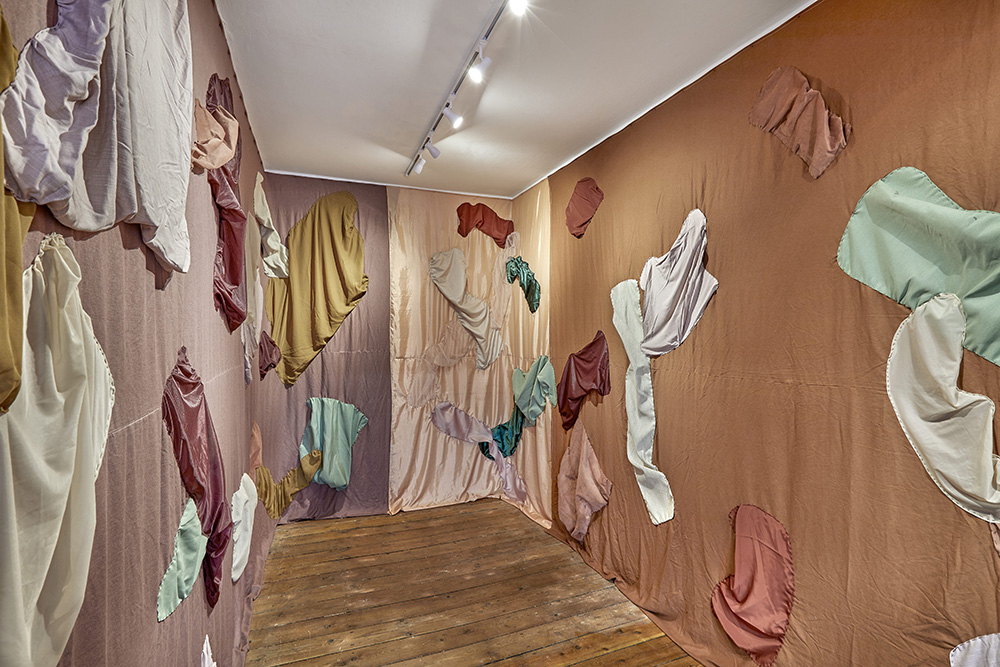 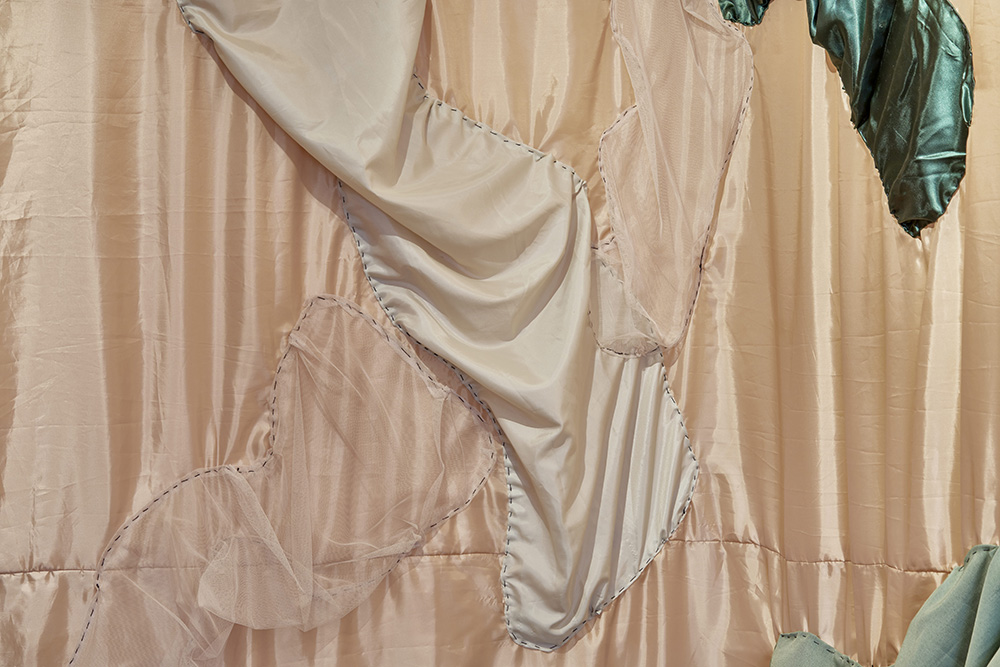 Signe Maria Friis creates her own ritual processes and expands them into basic forms of role play and installation, where materials such as 3 white fabric pages with 21 ‘pockets’ make up a visual diary of 21 days. In this work, Friis touches on a performative approach as she will be activating these pockets during the exhibition period through her own intuitive actions. The artist has also created a fabric wall, installed in the rear space of the gallery, on which sewed forms and figures stretch from floor to ceiling will work an unfinished whole, where the viewer is both surrounded and invited to come up close and engage visually these forms.

Unveiling Forms: Beyond Me is an artistic intervention into unpredictable and liberating states of being. Friis’s artworks are characterised by the sense of a personal and sensitive attempt to dissolve time and place, in order to exist in a moment in which norms can be erased and expressions can unfold on their own terms. Lise Grüner Bertelsen, curator of the exhibit points out that "Signe Marie Friis distances herself from sculpture’s traditional means such as weight, mass and stability, and instead makes use of the tactility and flexibility of textiles. This is a choice she uses actively, and which is expressed, for example, in the video work in which a dialogue feels its way and a gradual fusion occurs, through organic forms and figures as well as her own movements and dance. Friis seeks to emerge into an abstract figure precisely at the point where the border between herself and other figures dissolves. A transformation in which the habitual functions of the body are simultaneously hampered and set free."

In their video work, the artists look at this multinational corporation and its extraction project by filming directly at Cerro Blanco (which the company at the time claimed contains the world's largest titanium reserves). Intrigued by the improbability of a bankruptcy when titanium as a mineral is in such demand, not only by our technological sectors, but also by our desires through the various devices and materials provided en masse by the global economy, Lehman Brothers set out across the desert to investigate. They observe in their work that the bankruptcy mirrors a typical pattern for mining operations in the north of Chile, which have been characterised by 'boom and bust' cycles throughout the country’s history, beginning with silver and saltpetre extraction approximately a hundred years ago, to for example copper and lithium extraction today. Their work makes us consider directly our own relation to the extractivist economy, and causes us to reflect on how we can begin the hard work of reconsidering the promises of extraction vs the waste and drain it imposes on individual countries and the world as a planetary ecosystem.

As such, the artist’s de/re-construction of sculpture and the body intimates references to the work of earlier female sculptors such as Eva Hesse, while at the same time speaking to our current moment, in which the pressure to perform, to always be one’s best self, opens onto outright vulnerabilities felt keenly in the body, where the sense of self is increasingly entangled with a precarious reality.

Signe Maria Friis’ solo exhibition at SixtyEight Art Institute is an opportunity to test some of these ideas but also an open field of new directions for this emerging artist.

Signe Maria Friis (b. 1993) is an artist currently studying at the Funen Art Academy. In 2019 she made her debut at Kunstnernes Efterårsudstilling (The Artists’ Autumn Exhibition), where she won the KE Prize. She primarily works with textiles as a material. She expresses herself in the form of abstract characters in staged spaces in the costumes she creates. In her work with sound, video and sculpture she explores movement, sensuous space, and the potentiality of objects in interaction with a living body. Signe Maria Friis has exhibited at Den Frie, Lokale, Galleri NU, Det Blå Kvarter, Kødbyen, Gammelgaard, and Billboard Istanbul 2020. In addition, she has been awarded a work residency at Bronzestøberiet. She lives and works in Odense.

Lise Gruner Bertelsen (b. 1988) is a freelance curator and writer, and is associated with SixtyEight Art Institute as a curator as well as being an assistant editor for the Institute’s publishing arm Really Simple Syndication Press. Her curatorial work is often research-based and interdisciplinary. Since 2017 she has been part of the artistic work group The Winter Office, which among other things investigates how a new realism can be created about the global climate crisis through spatial justice theories. She has co-curated the exhibitions #SYNCHRONICITY, 18th Street Arts Center, Santa Monica (2019); Non-Perfect Dwelling, Armory Center for the Arts, Pasadena (2019); and curated Learning from A.N.A, SixtyEight Art Institute (2019) for The Winter Office; and recently Billboard Istanbul 2020 which is a city-wide public space exhibition in Istanbul. She lives and works in Copenhagen.