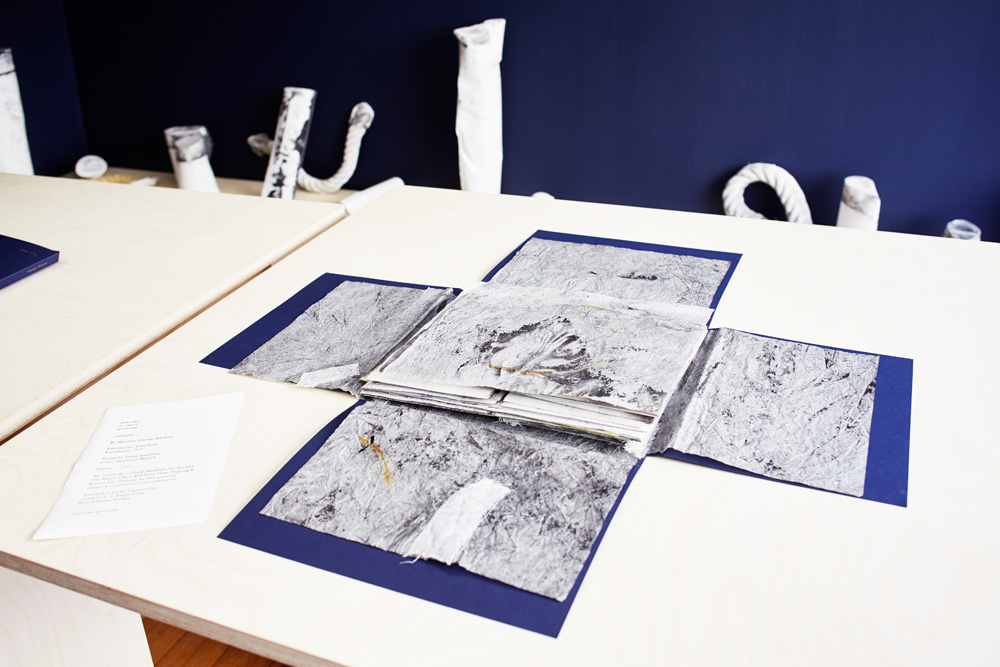 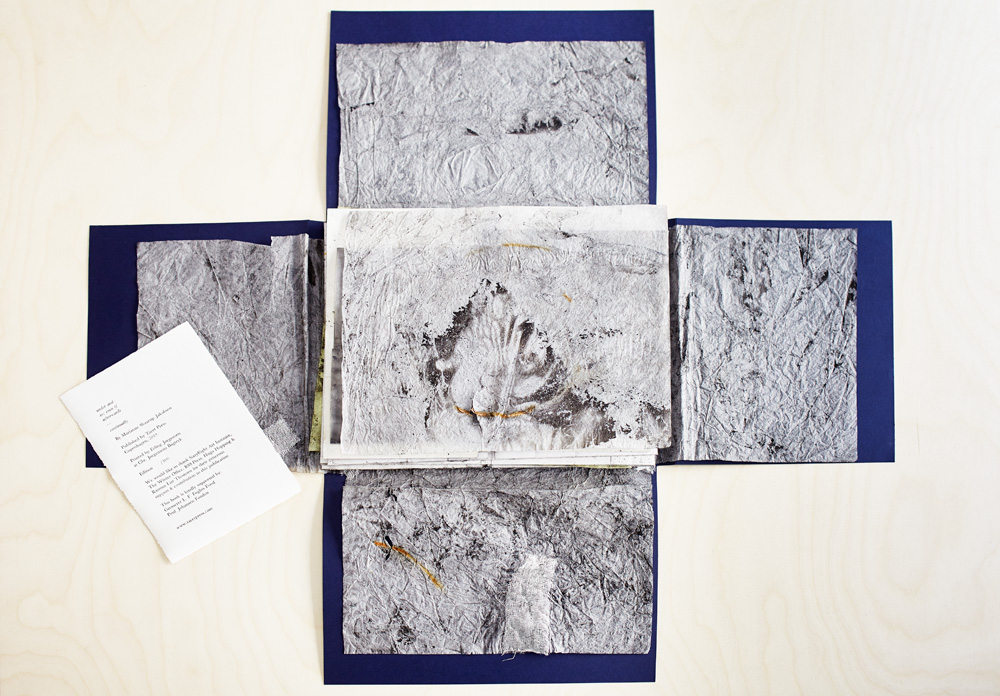 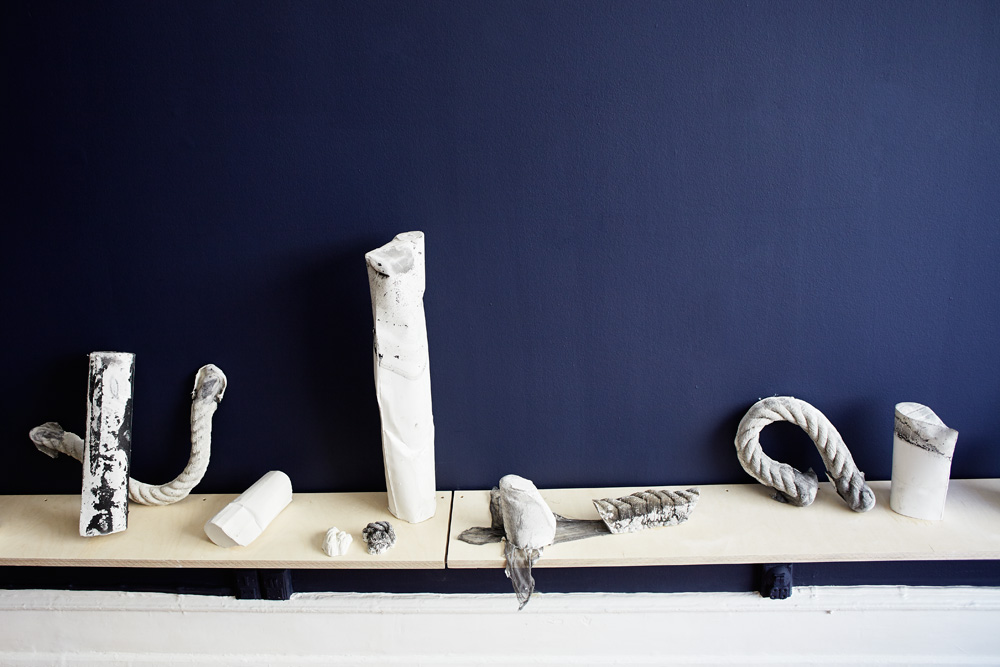 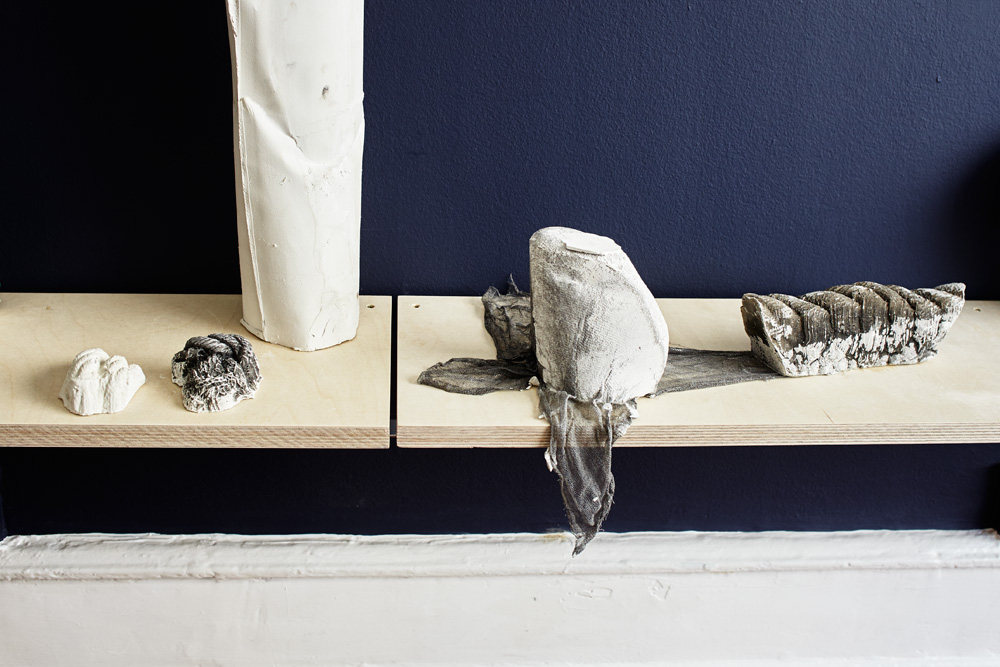 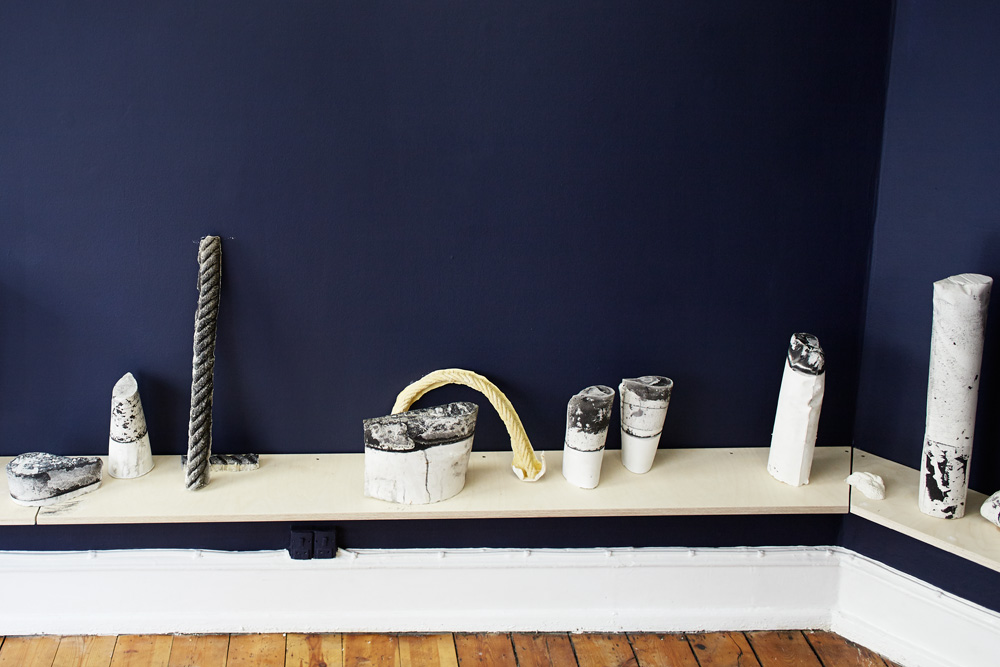 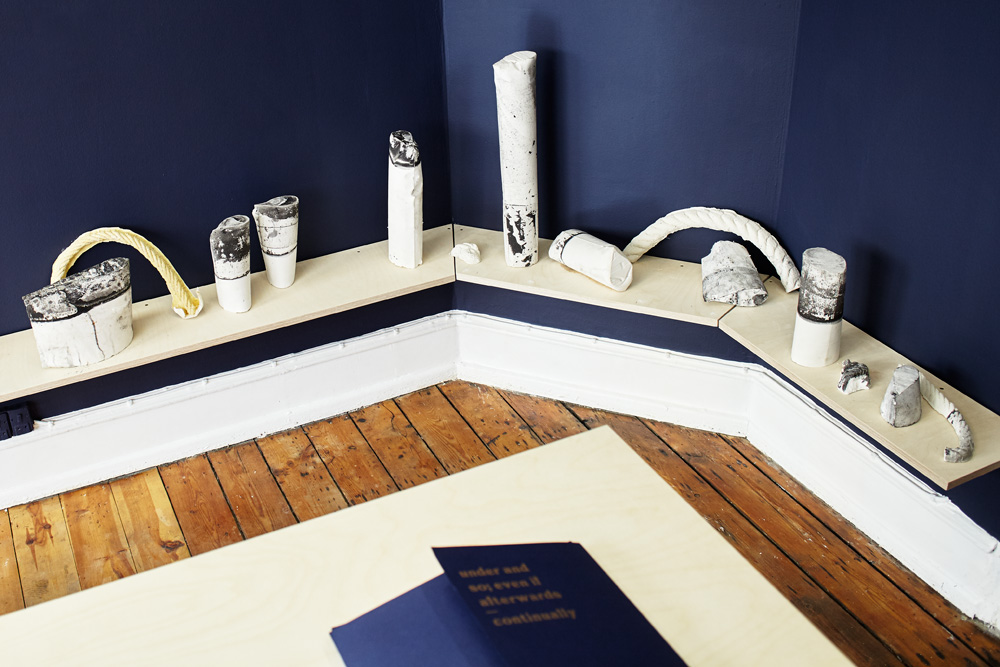 This exhibition-making project emerged out of an artistic research process was been driven by the completion of an artist book produced by Marianne Skaarup Jakobsen and now published by Tacet Press. The entire book project and the resulting exhibit were organized through a special collaboration between SixtyEight Art Institute and Tacet Press.

Concise Voids and Sediments consists of new artistic research exploring the productivity of repetition, time, folds, and the language of objects. The purpose was to make an artist book that examined and layered the conjunctions and interplay between touch and sight as an effort to render accessible the stubborn syntax of the sublime. The book, called under and so; even if afterwards – continually, gradually and materially expanded from the environment of the artist studio into this solo exhibition.

To this end, Marianne Skaarup Jakobsen’s new publication project gives viewers access to ideas surrounding the unlimited non-verbal speech of objects – or better yet – to the conversations objects have with each other without our cognition. The resulting process of assembly unravels the tension between the book and the installation, where these behave together as an environment, where artworks, refuse, and readymades unfold and merge in dialogue with one another in the exhibit.

Skaarup Jakobsen’s practice and inquiry is essentially a material investigation into the visual and linguistic aspects of the artwork. Where ideas of the infinite that the artist pursues, diversify questions of perception and how these often give the plasticity of her objects and their surfaces a feeling that time is present and non-present.

In this sense, the exhibit was a snapshot into Skaarup Jakobsen’s use of inks, paper, plaster, metals, and other materials to produce interrupted or ruptured sedimentary layers that illustrate a shattered continuity and aesthetic. Such as those broken or eroded layers that recall how entropy and time are still abstract concepts for how we relate to objects we no longer perceive.

Throughout Concise Voids and Sediments, the ‘golden thread that we entangle between furniture’* – between objects – could be engaged with and referred back to the book, since it was available for viewing in relation to the overall installation and throughout the two-month period of the exhibit. During this period, additional copies were folded and pressed to eventually form a numbered edition of 100 books.

Tacet Press is the emerging publishing house responsible for this special commission of Marianne Skaarup Jakobsen’s book project. The exhibit and publishing project were organized in close collaboration between Tacet Press and SixtyEight Art Institute and as part of the latter’s ongoing support of intricate and medium-based artistic research.

The book under and so; even if afterwards – continually is available for sale and distribution by Really Simple Syndication Press.

Marianne Skaarup Jakobsen holds an MFA from Malmö Art Academy. She is currently based in Copenhagen, though between 2009 – 2017 based in Amsterdam, Malmö and Lisbon. She works with sculpture, through a processes of intuition and experiments or explorations driven by emotions. Recently her solo-exhibition Lift, then was shown at The Geological Museum in Lisbon. Previously her work has been shown in contexts such as the biennale Kolonien II in Rødovre, Copenhagen, Galleri Riis in Stockholm, Den Nordiske Ambassade in Copenhagen, Sótão in Lisbon and Malmö Art Museum. Among several other residencies she has had an artistic residency at HANGAR in Lisbon. https://marianneskaarup.com

Tacet Press exists as a collaboration between artist Trine Struwe Hansen and graphic designer Ida Elisabeth Jensen. Through a series of exchanges between artists, they facilitate experimental exhibitions and artist books; developed around the book as medium and as potential. This inaugural book for the press under and so; even if afterwards – continually and exhibition Concise Voids and Sediments project for Marianne Skaarup Jakobsen are kindly funded by Poul Johansen Fonden and Grosserer L. F. Foghts Fond.