Isabelle Andriessen with a collaboration from Ida Marie Hede 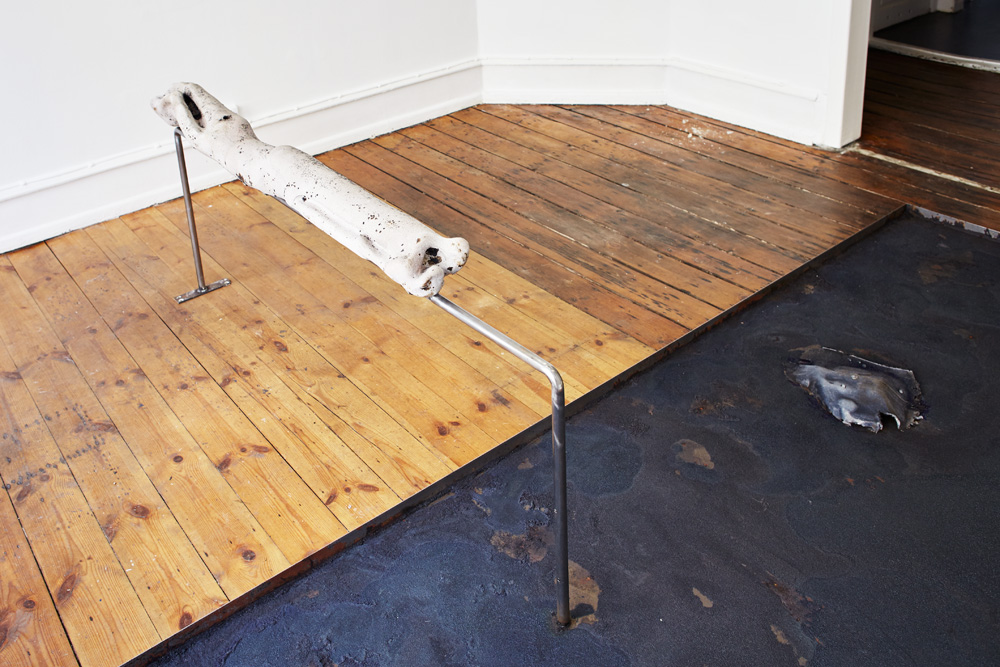 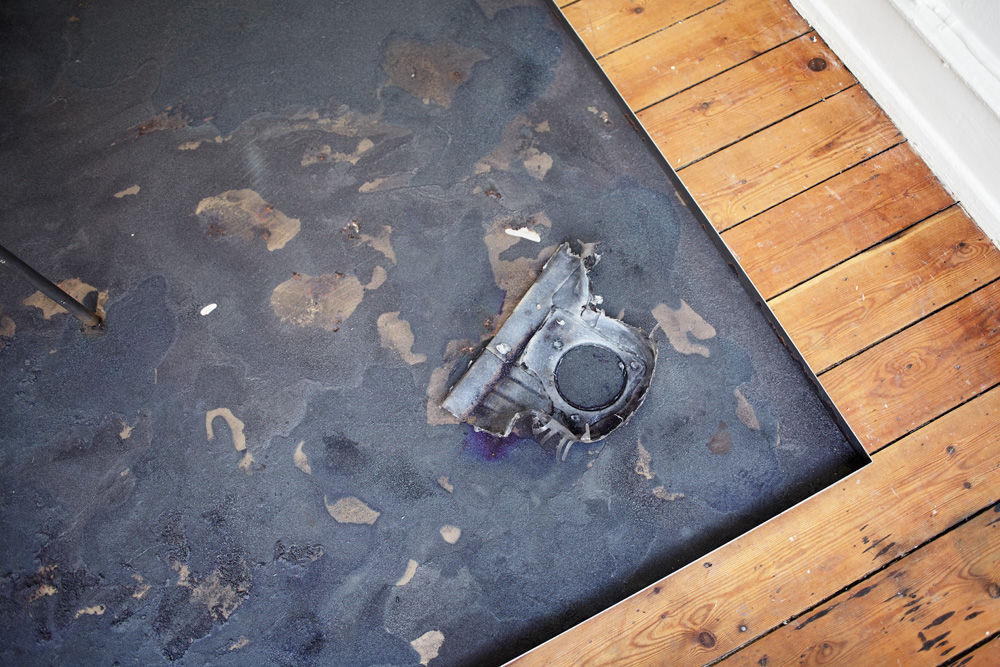 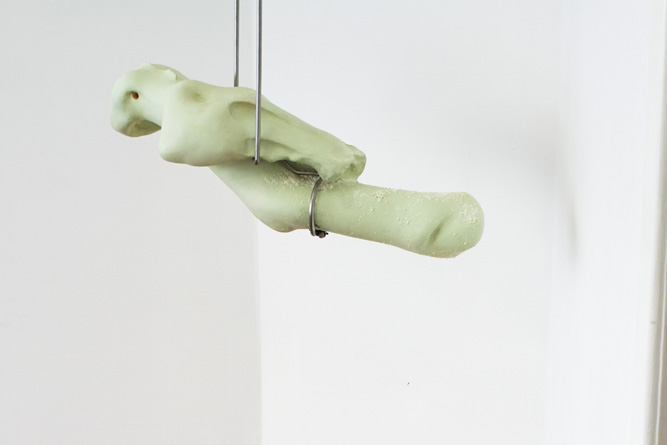 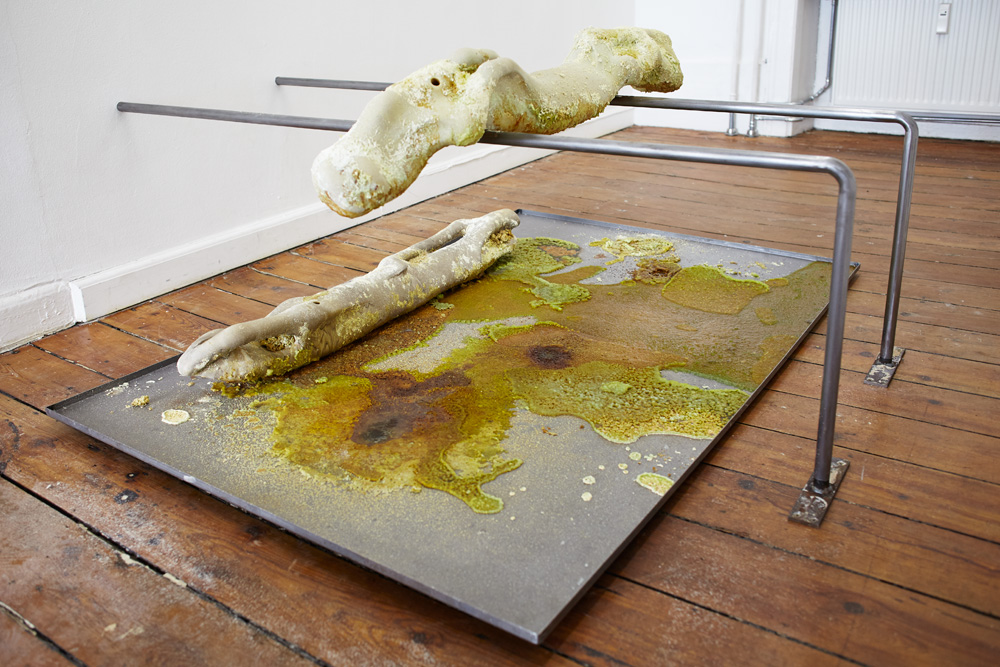 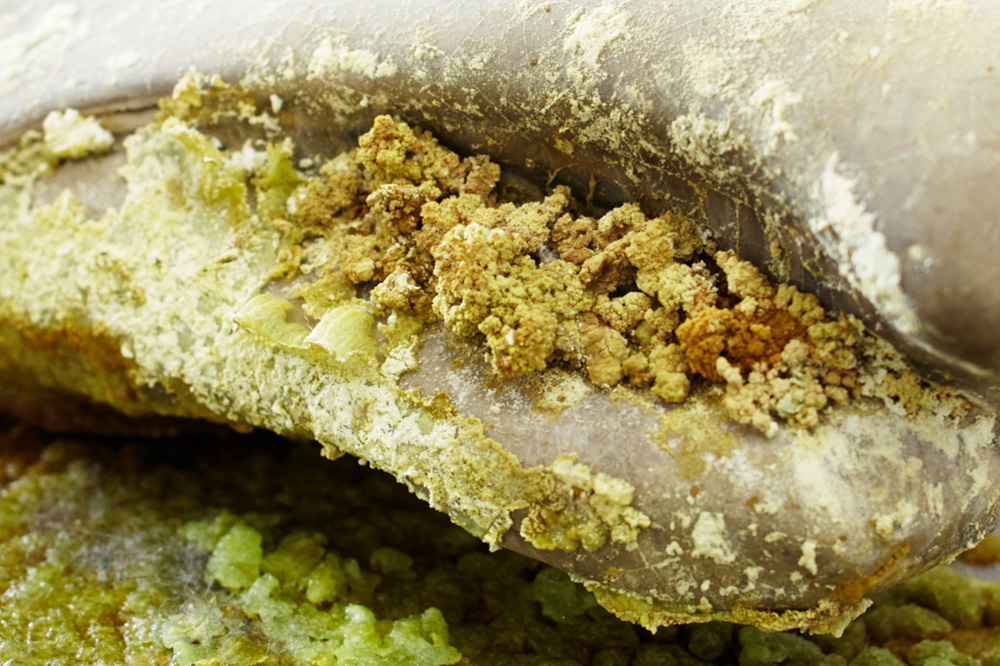 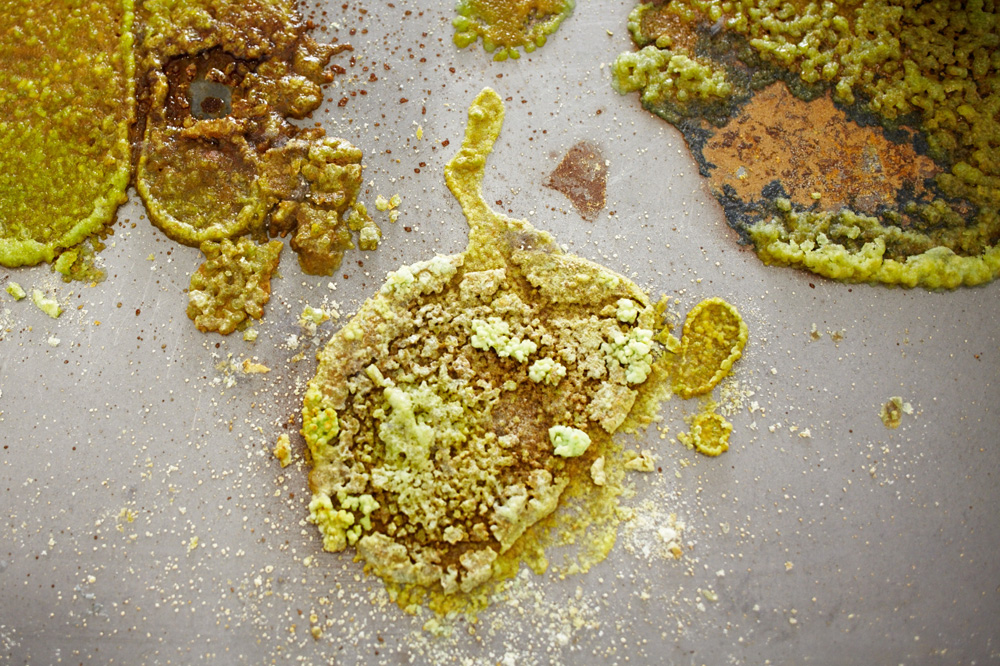 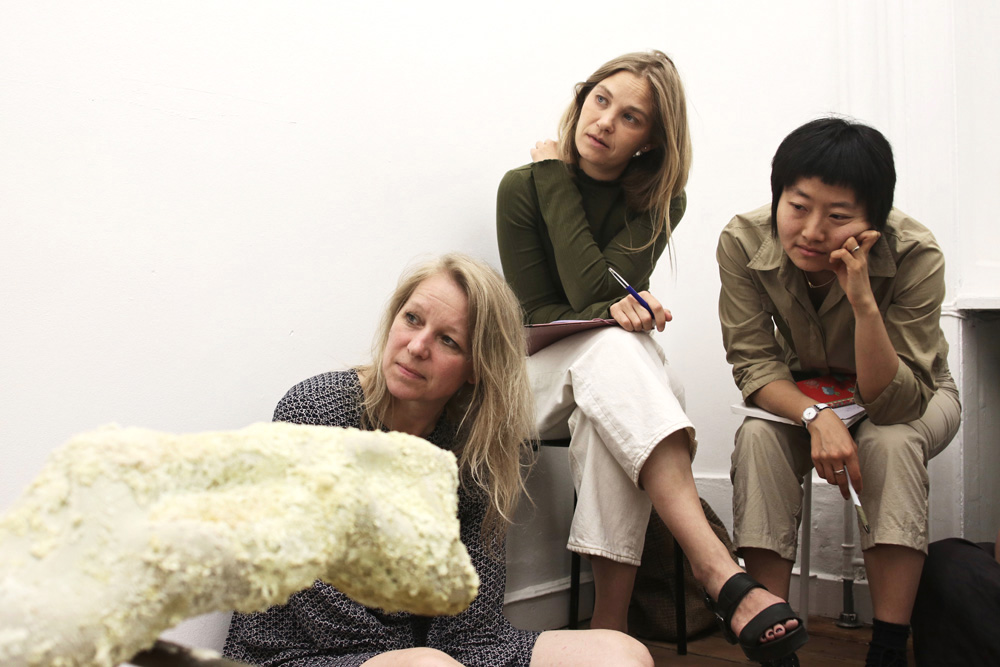 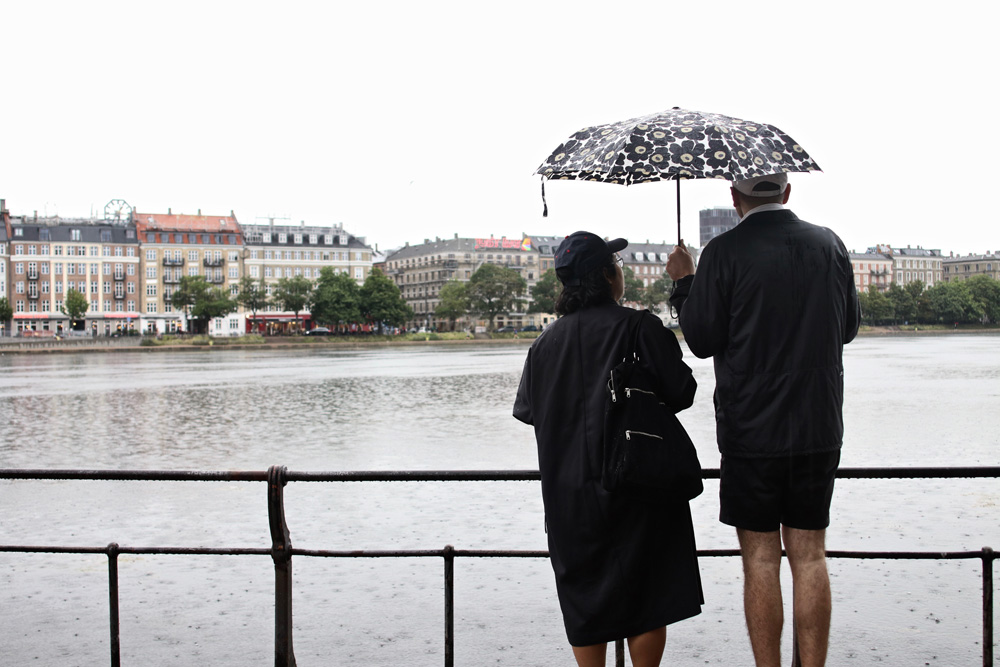 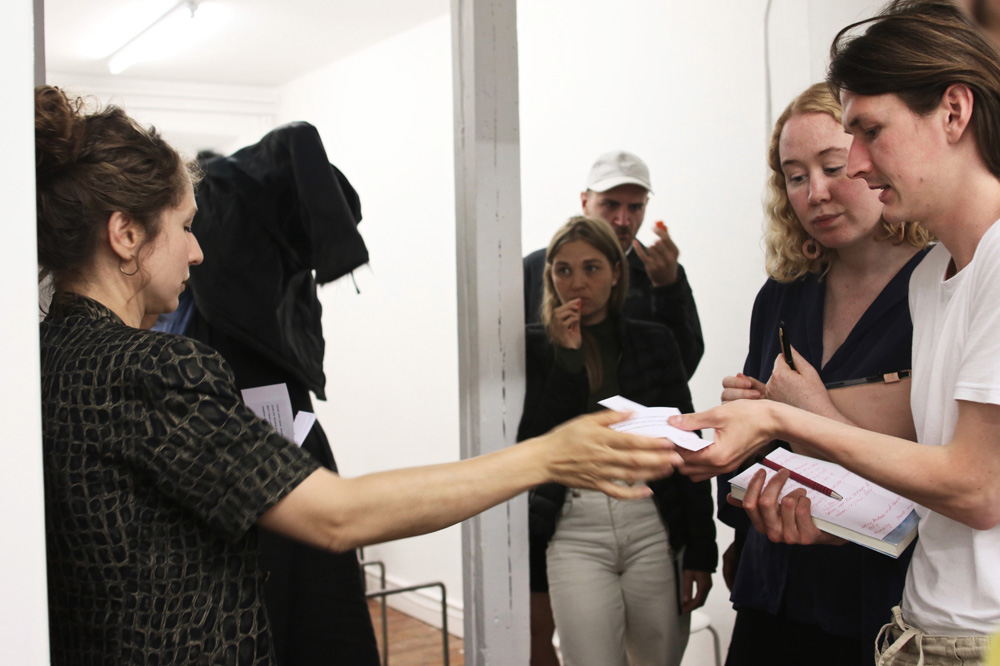 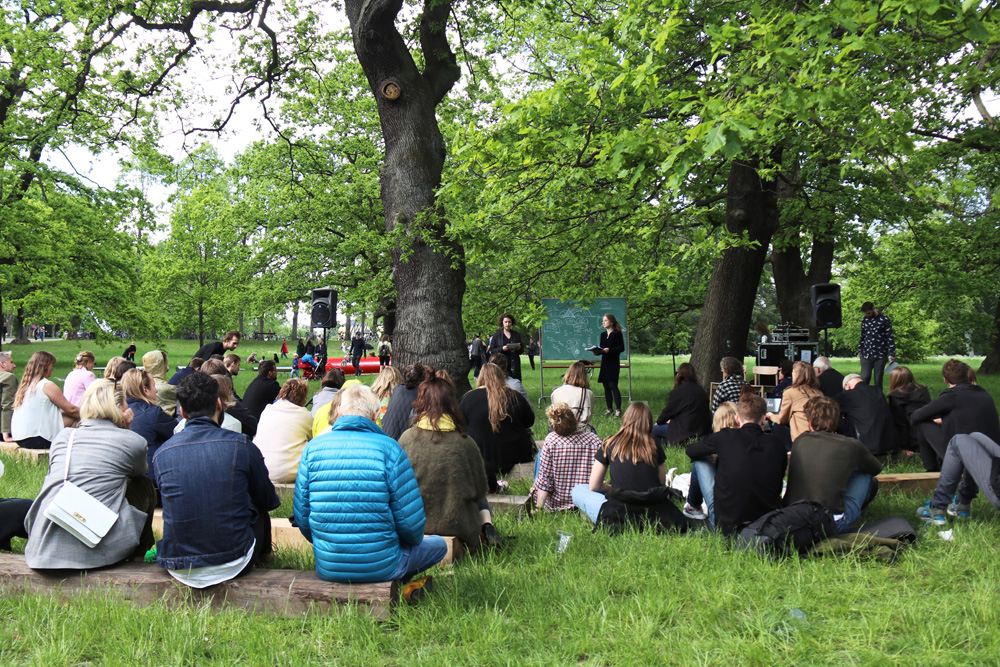 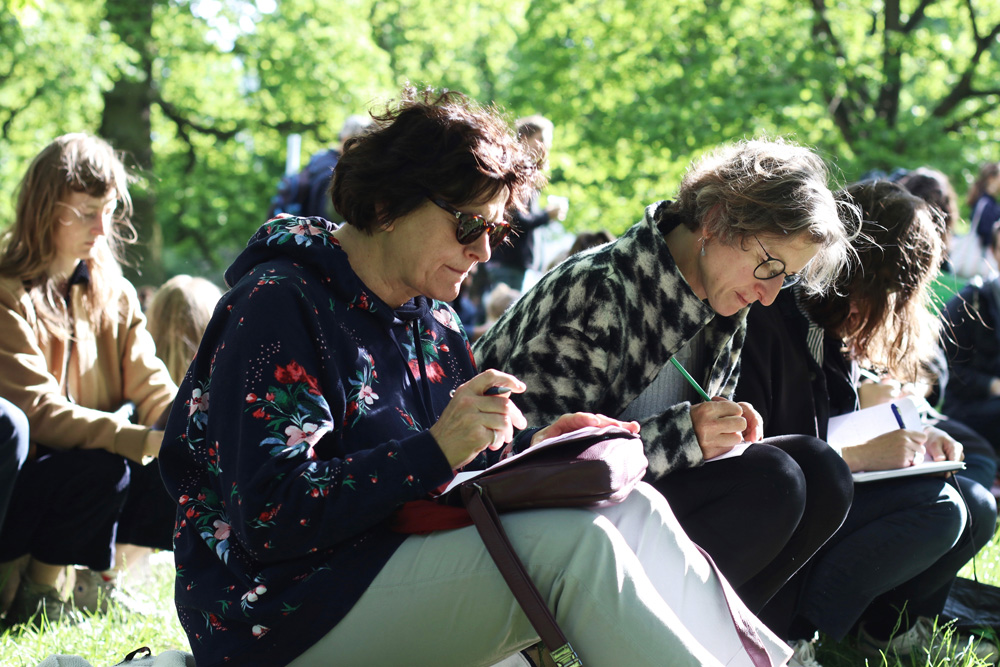 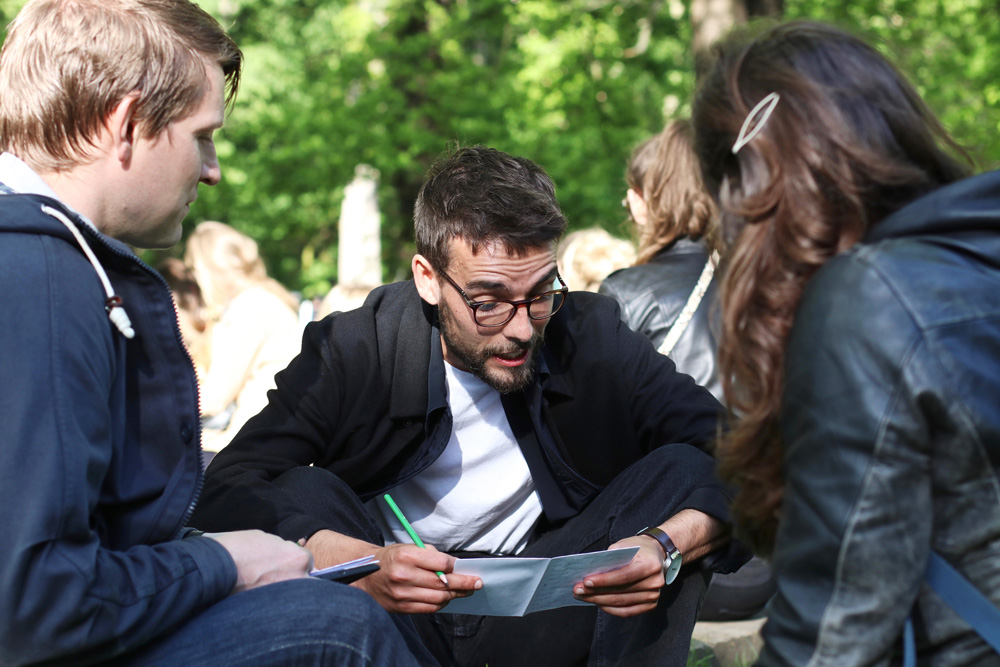 Weathering: Tidal Spill (day 331) is an exhibition and knowledge-making project that explores the relationship between the body and the weather, speculating on the changes in (human) embodiment in this time of climate crisis. The project features sculptures by the Dutch artist Isabelle Andriessen as well as a collaboration between the curator and the Danish writer Ida Marie Hede. Weathering: Tidal Spill (day 331) is organised by SixtyEight Art Institute and the Danish curator Miriam Wistreich from the Laboratory for Aesthetics and Ecology.


Talking About the Weather

The Danish summer of 2018 was the warmest and sunniest in more than 100 years. Nationally, Denmark was hit by a heavy drought, and in neighbouring countries forest fires swept the landscape with devastating consequences. In Tokyo temperatures rose to over 40 degrees celsius for the first time ever, while in Australia bats fell from the trees, boiled to death by the scorching sun. Globally, thousands of human and non-human lives were lost. As we tentatively make our way through an era of rising sea levels and more extreme temperatures across the globe, talking about the weather ceases to be simply small talk.

The weather and the climate are traditionally understood as two distinct phenomena: the climate is an abstraction, an amalgamation of global, long-term patterns and data, while the weather possesses the immediacy of what we see and feel - the wind shaking the trees outside our windows, the pouring rain drumming on our skin. Australian feminist philosopher Astrida Neimanis has problematised this distinction by pointing to the inaccessibility of the concept of the changing climate to human perception. Because of the enormity of climate change, both in terms of space and time, it is easy to project its consequences onto others far away, or to simply ignore that anything is the matter. So what might happen if we challenge official definitions and think of the weather and the climate as inseparable phenomena?

When we think about the weather, and about the larger question of climate change and its consequences, debates often focus on maintaining the status quo, on keeping intact our existing possibilities and lifestyles. But thinking about the weather brings the issues home. To be weathered is also to be worn away by long exposure to the elements, to be touched and marked by atmospheric conditions. We can weather away or weather the storm. Neimanis uses the concept and practice of weathering to think about and establish practices that cultivate attunement to how our own bodies and the bodies of others experience the weather. Contrasting weathering with the neoliberal idea of resilience, Neimanis asks what it would mean to harness the mundane experience of weather as a site of politics. Weathering, she suggests, invites us to consider what we will lose along the way: “Weathered bodies, weathered houses, weathered cars, weathered clothes, weathered relationships, weathered dreams – these all bear scars of what has worn them down, and of what they have been asked to carry, to survive, and to hack.”

Andriessen’s work engages with questions of the living and non-living in the age of planetary climate change. She conducts research into actor-network theory and feedback loops, borrows concepts and processes from physics and chemistry, and investigates ways of animating inanimate materials. Working closely with scientists, she creates ‘zombie materials’, non-living sculptural entities that show signs of life in spite of their status as objects.

Tidal Spill (day 331) is a series of time-based ceramic sculptures that develop from the moment the materials are activated, continuing their life span over the course of the exhibition and beyond. The works contain a chemical solution that is absorbed by the porous ceramic skin, causing them to develop crystals, grow rash-like fur, and display symptoms of metabolism and disease. Andriessen's works are eerie performers, composed of materials that act and evolve, seemingly beyond control and often irreversibly. Each sculpture develops along its own timeline according to its chemical composition, showing signs of ageing in the form of crystals that turn from green to brown and back again, or strands of alien hair that grow from the creases of its body.

Life, or the living, is defined in biology through metabolism, the chemical processes that occur within a living organism in order to maintain life. The embodied signs of this in humans include sweating, growth, and weight loss. The non-living inhabitants of Andriessen’s installation continually show signs of something akin to life and blur the boundary between living body and dead object. They engage in a durational non-human performance without end, without the death of their weathered, non-living bodies. By continuing to develop long after we are gone and changing in ways we cannot imagine, the works reflect the challenges of the climate crisis in sculptural form. They are future fossils, early life forms evolving on a distressed planet, or the repugnant leftovers of a world that has collapsed under the forces of climate change. Together, these non-living agents form a grim and sticky zone, a weather-bitten imaginary of decay.

Andriessen’s work suggests an after, a next to or a beyond the world and life itself as we humans have come to know it. As such, the work underlines the sublime character of changes in planetary time and space. Often it is the magnitude of its consequences that prevents us from relating to the effects of climate change. Andriessen’s work suggests a possible future that urges us to reimagine our ideas of the living in an ecology under threat.

Climate change forces us to reconsider the boundaries between humanity and our surrounding habitat. The weather offers a topos to think through questions of time, space and human subjectivity under siege by planetary changes. As French phenomenologist Maurice Merleau-Ponty reminds us “Nature outside of us must be unveiled to us by the Nature that we are... We are part of some Nature, and reciprocally, it is from ourselves that living beings and even space speak to us.” Merleau-Ponty’s philosophical work was instrumental in challenging the longstanding heritage of the Cartesian mind-body dualism, which continues to haunt Western thought. Merleau-Ponty’s observation feels even more urgent as our changing Nature-Culture unveils itself inside us through traces of microplastics and DDT. From the  perspective of feminist entanglement and cohabitation, Donna Haraway has reminded us time and again that we do not become in singularity, but are always already in conversation with our worlds, human and more-than-human, always becoming with. Cultivating weathered attunement can guide our embodied attention to how our own bodies, and the bodies of others, live through weathered realities.

The weather has always affected us. We become with weather: S.A.D. due to cold winters, tanned from trips to the beach, cancerous from taking too much sun. But we do not all weather equally. As Neimanis reminds us: “even though we’re all in the same planetary boat when it comes to global warming, we’re not all in it in the same way… Climate change is undoubtedly political – but all the more so because of these uneven individual and collective experiences of the weather.” To build embodied cognition allows us to imagine the many lives and worlds of this endangered planet, to weather together across human and more-than-human lines.

As part of Weathering: Tidal Spill (day 331), author Ida Marie Hede and curator Miriam Wistreich will be hosting Weather Writing Workshops developed after Neimanis’ work with weathering. Based on methods from écriture feminine, eco feminism and posthuman theory, the workshops invite participants to write their weathered bodies in order to channel a more dense understanding of the co-constitutions of human and climactic natures. The workshops will channel the weather through our human bodies and stimulate our meteorological imaginaries and understanding of human-weather interrelations. By asking: Where is the weather? What does the weather remember? What does it forget? Weathering: Tidal Spill (Day 331) constitutes a speculative investigation of how we can relate sustainably and ethically to the objects and systems around us, acknowledging that “human and non-human worlds weather together in a fraught and desirous intimacy.”

Ida Marie Hede is a writer and educator. She holds an MA in Art History from the University of Copenhagen as well as a degree in Visual Cultures from Goldsmiths. She graduated from Forfatterskolen in 2008. Hede has published seven books, most recently En to tre (2016) and Bedårende (2017), nominated for the Danish Critics’ Award. Her writing practice involves multiple interdisciplinary publications and collaborations, among others with visual artists Nanna Debois Buhl og Ursula Nistrup. Hede is a critic at Danish newspaper Information and has previously received the prestigious three-year work grant from the Danish Art Foundation.

Isabelle Andriessen was educated at Gerrit Rietveld Academy and Malmö Art Academy. She is based in Amsterdam, where she participated in the Arts & Science Honours Program of the KNAW Royal Dutch Academy of Science and Academy of Arts, and recently finished a residency at Rijksakademie van Beeldende Kunsten. Her interdisciplinary work borrows notions from philosophy, chemistry and physics in order to contemplate the boundaries of life and non-life, of the human and the non-human. Her work has been shown at Hotel Maria Kapel in Hoorn, NL, at Galleri Nicolai Wallner in Copenhagen, at Lafayette Anticipations, Paris and at Stedelijk Museum Amsterdam. In 2019 she will participate in the 15th Lyon Biennale, Lyon, curated by the team of Palais de Tokyo.

Miriam Wistreich is a curator, educator, writer and researcher. She holds a BA in Art History from the University of Copenhagen and an MA in Interactive Media: Critical Theory and Practice from Goldsmiths, and is an alumnus of De Appel Curatorial Programme. Her interests revolve around embodiment, both human and non-human, and the ways in which subjectivity is formed and negotiated within neoliberalism. With the Laboratory of Aesthetics and Ecology she has co-translated and published texts by Donna Haraway and Astrida Neimanis. She has previously curated talks, exhibitions and workshops at NLH Space, C4 Projects and The Royal Danish Academy of Fine Arts, DK, and at De Appel, Stedelijk Museum Amsterdam, Sandberg Instituut, NL.

Laboratory for Aesthetics and Ecology is a curatorial platform concerned with questions of global multispecies suffering. LABAE works with experimental exhibition formats and knowledge productions in the knotty entanglements between the human and the non-human, between the arts and the sciences, guided by queer ecologies, multispecies storying and ecofeminist strategies – be they artistic, theoretical, scientific or everything at once. The Laboratory runs a micro publishing house and has curated exhibitions, symposia, events and more on boats and beaches, in museums and greenhouses across the world.

Weathering: Tidal Spill (day 331) is kindly funded by Grosserer L.F. Foghts Fond, Mondriaan Fund, Rådet for Visuel Kunst and the Danish Arts Foundation. A previous edition of Tidal Spill was funded by Lafayette Anticipations. The production of new work for this exhibition was made possible by a residency at the Danish Art Workshops.